At it again with graphic photos of bloody undeveloped fetuses, the Canadian Centre for Bio-Ethical Reform (anti-abortion and anti-stem-cell-research group) has opted this time to erect a big poster on Erin Mills Parkway in Mississauga today. Thankfully it was facing the other direction and my young daughter didn’t see it. 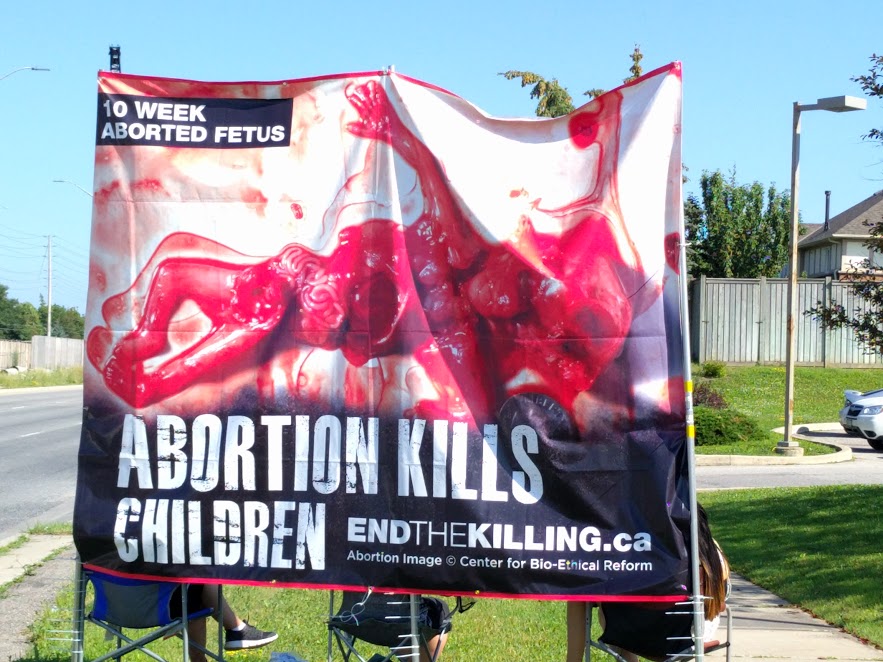 Three young women have been moving this poster around the GTA lately (Photo: Derek Gray)

After dropping off my daughter, I went back to take the photo above and confirm with them that they were in fact the same group with whom I had previously had complaints (covered at My Secret Atheist Blog). Back in 2015, in the run-up to the federal election, it was a front-door postcard blast across the city, which was condemned by Mayor Crombie at the time. For election, they had partnered with a Catholic anti-abortion Campaign Life Coalition Youth.

There were three young women (you can see them partially at the bottom of the photo) sitting in the shade of the poster. Only one was talkative but declined to give her name. In answer to my questions she said they had been moving to random places around the GTA and had been in Toronto earlier in the day. They use the shocking images, they claim, in the same way as other social reform movements have used shocking images.

I asked what kind of feedback she was getting, and then specifically what was the negative feedback. I pressed her on reactions they get with the graphic pictures. She actually said “if there was a way to avoid children seeing it, we would do it.” Bullshit-detector ringing, I asked why they couldn’t simply mail their message in an envelope so my children don’t see it before I do. The response was essentially: “we found we got equal numbers of complaints with versus without envelopes.” With some confusion as to the relevance of the complaint count, I asked for more and got “we can avoid the case of people not opening the envelope by not using them.” So, no, you aren’t doing any of the many possible options to target only adults because your only concern is maximum impact. They were on a busy parkway on route to several Mississauga gyms and sports centers but she felt totally OK with that because “we wouldn’t set up right beside a day care.” Gee, thanks. (They’ve been slammed for being outside a high school if I recall…)

In total disregard for the well being of children who’ve actually been born and despite a judge virtually equating their bus ads to hate speech against women, they chose to splash these photos for maximum shock value.