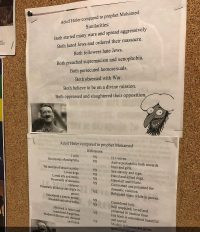 Wait, Hitler didn’t personally murder anyone? Well, shit, I guess he wasn’t as bad a person as I thought!