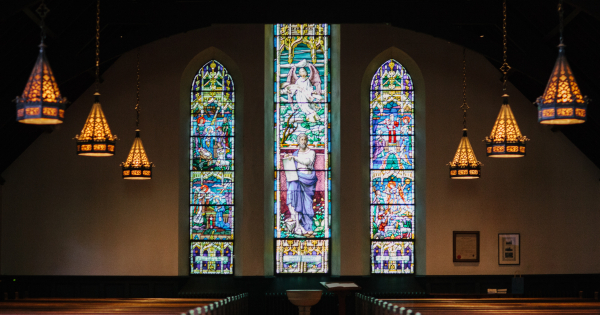 Rev. Gretta Vosper of West Hill United Church in Scarborough, Ontario, went through an approximately 3-year ordeal – almost 4 in fact – in the uncertainty of station in the Christian denomination The United Church of Canada, arguably the most progressive sect in the nation and much of the world (not my opinion alone).

Take, for example, the fact of the matter as the first church to permit the ordination of women, circa 1936 with Lydia Guchy (University of Toronto, 2017; BC Conference of the United Church of Canada, 2018).

Also, we can take Vosper stating that The United Church of Canada is the “most progressive denomination in the world, as far as I’m concerned” in a podcast with Ryan Bell (Garrison, 2016).

In a conclusion-of-the-ordeal article, following the first article a couple years prior, Garrison (2018) notes, “Vosper hopes to create resources for the development of secular communities that have these multilayered social connections within them.”

A community was the point the entire time. Vosper remains a person oriented around the construction of community. She has also been labeled a “brave woman,” and rightly so (Thomas, 2018). The reason, as noted by Thomas, “… her situation grabbed headlines when she wrote a letter to the church’s spiritual leader after the January 2015 terrorist massacre at the Charlie Hebdo newspaper office in Paris. Her point: Belief in God can motivate bad things” (Ibid.).

More pointedly, Vosper denounced the belief in a supernatural “being whose purposes can be divined and which, once interpreted and without mercy, must be brought about within the human community in the name of that being” (Longhurst, 2018).

This was, in part, a basis for Vosper, personally, to be unable and unwilling to reaffirm the original vows during ordination in The United Church of Canada. There was supposed to be a hearing for Vosper, and then delays in the hearing occurred for some time – until recently.

As reported by Longhurst, “…before that hearing took place, the Toronto Conference and Vosper reached a settlement on Nov. 7 to let her keep her job” (2018). However, the church released another statement in reaffirmation of some beliefs following the announcement of the reaching of a settlement (The United Church of Canada, 2018a).

“In a brief joint statement, the Toronto Conference, Vosper and West Hill Church said the parties had ‘settled all outstanding issues between them,’” as reported by Longhurst (Longhurst, 2018; The United Church of Canada, 2018b).

The articles, since the November 7 press statement, continue to come out, even more than one month later (Stonestreet, J. & Morris, 2018; Bean, 2018). According to Vosper’s lawyer, Juliana Falconer, there was a rational calculation on the costs and benefits of a continuation of the disagreement, for all parties (Ibid.).

Douglas Todd, a long-time religion and belief commentator, lamented the lack of open reasoning for the decision by The United Church of Canada (Todd, 2018).

Todd argues The United Church of Canada is the main source of “worm theology,” which amounts to engagement in identity politics and followers who “perceive themselves as fundamentally flawed, guilty and unworthy” (Ibid.).

While also considering the prior statement of The United Church of Canada, we can see the earlier tone, as declared:

We have concluded that if Gretta Vosper were before us today, seeking to be ordained, the Toronto Conference Interview Committee would not recommend her. In our opinion, she is not suitable to continue in ordained ministry because she does not believe in God, Jesus Christ or the Holy Spirit. Ms. Vosper does not recognize the primacy of scripture, she will not conduct the sacraments, and she is no longer in essential agreement with the statement of doctrine of The United Church of Canada. (Henderson, 2016)

But with some cultural knowledge or research into the belief of clergy in congregations around North America, there is a long history of doubting leaders alongside the larger disbelieving laity, who may simply suspect but not explicitly know about one another.

One such project was set forth by Tufts University Professor Daniel C. Dennett and Independent Qualitative Research Consultant Linda LaScola, called The Clergy Project (The Clergy Project, 2018). (If you look close at the banner collage image at the top of the main webpage of the website, you can see Vosper’s photo.)

Vosper simply becomes another in a long line of brave individuals, as noted by Thomas (2018), working to expand the landscape of Christian and other spirituality in the early 21st century. A woman freethought pioneer within the tradition of The United Church of Canada.

The conclusion of the ordeal for Vosper has left some letters to the editor with laments, including the following from Steve Thorkildsen, “What will be next? School principals who don’t believe in the value of educating children? Doctors who don’t believe the natural progression of diseases should be interrupted? Engineers who spurn precision and believe that approximations are close enough? Our new Age of Reason doesn’t seem so reasonable to me” (Hamilton Spectator, 2018).

But even within The United Church of Canada, the head of the denomination is happy to keep Vosper (Stonestreet & Morris, 2018). Discomfort from some on the outside and resolute comfort, even happiness, on the inside.

One commentary, by Antonio Gualteri (2018), openly opined, “Now I wonder if the terms of the settlement between the two parties were based more on labour law than theology, though we may never know given the condition of confidentiality.”

In a nuanced view, he considers the critical issue not the atheism of Vosper but the approach to the Bible. While, at the same time, Vosper has spoken to these subtler concerns in prior writing, as cited in the article by Gualteri (2018).

That is to say, she (Vosper) states, directly, the problematic contents of the texts comprising the Bible with the “obscure,” “irrelevant,” and “dangerously prone to misguiding” contents of it (Gualteri, 2018; Vosper, 2016).

Perhaps, in other words, the issue remains not Vosper’s approach to the Bible, but, rather, with the applicability of the purported holy text to much of modern secular life and spirituality in standard interpretations, in contradistinction to the noteworthy but, likely, wrongly – inversely so – placed concerns of Gualteri (2018).

Vosper, in response to a question about “atheist minister” being, supposedly, an oxymoron, stated, “Not if you understand the history of biblical and theological study. For well over 100 years, we’ve questioned the authority of the Bible and recognized it was written by humans. When you do that, everything is up for grabs, including the idea of a supernatural God.”

She seems correct, in part, but this tradition of questioning of the Bible by prominent and intelligent women exists much farther into the historical record, including back to some of the earliest women geniuses in the Western philosophical tradition (Adler, 2018).

I speak, of course, of one of the few great women polymaths permitted to flourish, for a time, in the ancient world: Hypatia of Alexandria. She had a number of distinct statements about fables, myths, miracles, superstitions, and religions:

Fables should be taught as fables, myths as myths, and miracles as poetic fancies. To teach superstitions as truths is a most terrible thing. The child mind accepts and believes them, and only through great pain and perhaps tragedy can he be in after years relieved of them. In fact, men will fight for a superstition quite as quickly as for a living truth — often more so, since a superstition is so intangible you cannot get at it to refute it, but truth is a point of view, and so is changeable.

All formal dogmatic religions are fallacious and must never be accepted by self-respecting persons as final.

Taking the historical account and comparing to the current, we can see, at a minimum perhaps, an amicable solution, as per the joint statement, to the updated (a-)theological stances of Vosper within the “most progressive denomination in the world” and another woman, Hypatia, outside of the church in the ancient world, i.e., cut to pieces and mutilated to death by a Christian mob.

Both “brave” but, certainly, different contexts. In a sense, for the church and the Western critical tradition, and the popular reactionaries to freethinking women, this is, certainly, progress, of a kind, once more – and within a suitable Western tradition and Christian denomination.

BC Conference of the United Church of Canada. (2018). Rev. Lydia Emelie Gruchy. Retrieved from https://bc.united-church.ca/rev-lydia-emelie-gruchy/.

Bean, A. (2018, December 12). Lost in the debate over Trump’s silence during the Apostles’ Creed: a bigger issue for progressive Christians. Retrieved from https://baptistnews.com/article/lost-in-the-debate-over-trumps-silence-during-the-apostles-creed-a-bigger-issue-for-progressive-christians/#.XBokr2hKiM8.

Hamilton Spectator. (2018, November 22). Nov. 23: Pardon the turkeys, jail the kids, gender identity isn’t a theory and other letters to the editor. Retrieved from https://www.thespec.com/opinion-story/9046012-nov-23-pardon-the-turkeys-jail-the-kids-gender-identity-isn-t-a-theory-and-other-letters-to-the-editor/.

Henderson, S. (2016, September 22). A Message from the Sub-Executive of Toronto Conference Regarding the Review of the Rev. Gretta Vosper. Retrieved from https://torontoconference.ca/2016/09/message-sub-executive-toronto-conference-regarding-review-rev-gretta-vosper/.

The United Church of Canada. (2018b, November 7). Statement on the Rev. Gretta Vosper. Retrieved from https://www.united-church.ca/news/statement-rev-gretta-vosper.

Thomas, W. (2018, November 30). How to tell if your minister is also an atheist. Retrieved from https://www.niagarathisweek.com/opinion-story/9060407-how-to-tell-if-your-minister-is-also-an-atheist/.

University of Toronto. (2017, February 2). Changing roles of women in the Canadian churches. Retrieved from individual.utoronto.ca/hayes/xty_canada/xn_women.html.

Vosper, G. (2016, June 30). My Answers to the Questions of Ordination. Retrieved from https://www.grettavosper.ca/answers-questions-ordination/.

Photo by Karl Fredrickson on Unsplash