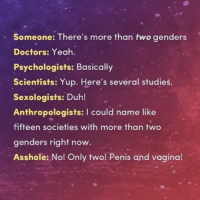 Asshole: And if a person has both, they’re two people!