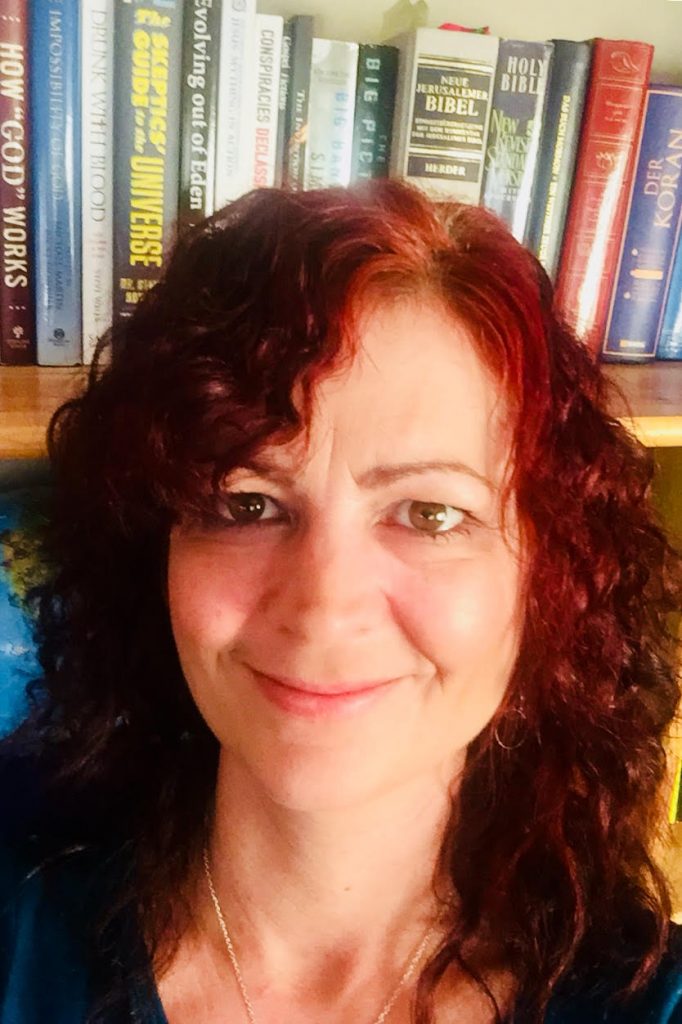 Elisabeth Mathes is the Affiliates Director in the Board of Directors for Atheist Alliance International. She studied psychology, communication science, and public relations at the University of Vienna. She lives in Canada with her husband and three children, where they run a logging company.

She is an outspoken atheist, anti-theist, and secular humanist. Mathes interest is in the Bible, critical thinking, the history of Christianity, logic, and the sciences. She holds fast to the separation of church and state.

In addition, she is responsible for book collection in Canada for the ‘Book Drive for the World’ project. She can be contacted on Facebook at  https://www.facebook.com/elimatez.

Here we briefly talk about his life and work.

Scott Douglas Jacobsen: Let’s start from the top, in terms of the family background in religion, what was it?

Religion has never been a topic my parents talked much about, and they are also no staunch believers in the bible being ‘the true word of the one and only true God’ (as far as I know, they have never even read the bible from cover to cover), at least they never brought it up.

Nevertheless, I and my two younger sisters had to go to church with them almost every Sunday and they were also good friends with the pastor and his wife.

I used to find church to be extremely boring and I couldn’t stand the hard wooden benches I had to sit on for more than one hour, and so I was very glad that I was finally free to decide to go to church or not after I had received the protestant Confirmation at the age of fourteen.

When I was a kid, I also attended Sunday school, where we sang Christian songs and read Christian cartoon books among other things, which I pretty much enjoyed.

All in all, I would say that despite my family considering themselves as Christian, going to church on a regular basis and participating in several church activities, religion did not play a major role in our family life.

Jacobsen: How was religion or irreligion incorporated into personal early life?

Mathes: I recall that my grandparents, especially my grandmother, who shared the house with us, talked about God on various occasions and would even threaten me and my sisters with hell when we were disobedient or caught lying.

Although I have never believed in the personal God of Christianity and never took the bible stories seriously, my grandmother’s repeated mentions of ‘God will do this, God will do that if you do this/ don’t do that’ definitely had an impact on me. It took me decades to shake off the feeling that I am constantly under surveillance by an invisible being.

Jacobsen: Were there pivotal moments in the development of your philosophical view of the world and your place in it?

Mathes: Yes, and both had to do with the books I read. At the age of fifteen, I read ‘The Power Of Your Subconscious Mind’ from Joseph Murphy, which opened up a new, everything-is-possible view of the world, but it also opened my mind to accept and believe unsubstantiated claims and magical thinking.

In the following years, I would become increasingly interested and engaged in esoteric concepts and New-Age teachings such as crystal healing, Tarot, Numerology, Astrology, guardian angels, Reiki, Aura, reincarnation, karma, telepathy and many more. I believed that everything that happens, happens for a reason and according to the ‘great wise plan of the universe’.

I trained my mind to always spot the good and positive side of everything, always looking for the hidden meaning, the mysterious purpose of everything. And no matter how bad or meaningless something actually was, I was always able to see the good of it.

Many years later, my thinking had become so irrational and delusional, that I was convinced to be able to communicate with extraterrestrial, spiritually and technologically high advanced beings from the Plejades, Sirius and Arcturus via telepathy.

I read a lot of articles and books about ETs and the various conspiracy theories that claim a worldwide cover-up of the fact that ETs have been on and around the earth for millennia.

I felt so very special because I knew things the majority of the people don’t know. At around the same time I used to participate in discussions about the ET- and UFO-topic in a popular German Mystery-forum.

This was the place where I first came in contact with the ‘bad skeptics’, who not only never became tired to tell me that I’m wrong but also why I’m wrong and who patiently and incessantly pointed me to the actual facts. I started to doubt my worldview thanks to these rational people.

But what finally made the cut was Carl Sagan’s book ‘The Demon Haunted World’. It started a process of almost two years of diligent research of every single belief about the world and my place in it that I held.

I wanted to find out the truth, the only truth and nothing but the truth and what is really there, so I also had to be brutally honest with myself and I eventually admitted that I had been wrong for a very long time.

Finally, I had turned from a gullible, ignorant and scientifically illiterate believer into a logically thinking, scientifically literate person who values reason and facts.

Jacobsen: When did you find the atheist community?

Mathes: During my quest to find the truth, especially while researching the God-question in more depth, I inevitably stumbled across the atheist community at some point.

One person definitely played a remarkable role, and without her, I may have never dealt with religion and the arguments for and against a god or gods in the first place. She was my neighbour five years ago and a very faithful evangelical Christian.

I think, the first time I have learned that an atheist community exists at all, was when I was looking for compelling arguments against the Christian God and the bible being his word.

Jacobsen: How did the discovery of this community lead to knowing more about Atheist Alliance International?

Mathes: I have been on social media for several years and came across AAI’s posts. I then read their website for more information and eventually signed up as a member, because their goals aligned with mine.

After Dominic Omenai, the initiator of the Book Drive Around the World in Nigeria, had told me that he contacted AAI to ask for support for his library, and because I felt that wanted to do more than just posting memes on Facebook and participate in discussions in atheist groups, I decided to become an active part of them. I had one of these famous ‘This is it!’ moments.

Jacobsen: How did you earn the position of Affiliates Director? What tasks and responsibilities come along with the position?

Mathes: In a quite unspectacular way: I was asked, if I would like to apply for one of the open board member-positions, applied for the Affiliate Director position and was approved by the board.

I see it as my most important responsibility to maintain a thorough and updated record of the atheist/humanist organizations and groups around the world. Other tasks are the recruitment of new affiliate members, contacting existing members and supporting their organization and respective projects and campaigns.

Jacobsen: What are some of the exciting new initiatives, campaigns, and projects of the affiliates ongoing for Atheist Alliance International in 2018/19?

Mathes: One of the exciting projects AAI currently supports is the Nigerian campaign: The State Governor of Akwa Ibom State is promoting a project to build a mega-church and contributing state funding.

Our affiliate, the Atheist Society of Nigeria, are trying to demand the cessation of this project and the contributions made by the government to be publicly disclosed via a court ruling.

Another campaign worth mentioning is the Universal Declaration of Atheist Rights: We will work with our affiliates and with atheist/humanist groups around the world to draft a simple but clear declaration of atheist rights—a catalog of the specific rights and freedoms necessary to ensure the principle of equality in matters related to non-belief.

The Declaration will then be taken to the United Nations and hopefully be tabled as a proposed UN resolution.

One of the long-term projects that AAI supports is the Book Drive Around the World: In cooperation with our affiliates, volunteers and book donors, we aim to establish as many libraries as possible in highly religious countries, where atheism, critical thinking and scientific knowledge are being opposed and actively suppressed.

The first library of its kind with books on atheism, science and critical thinking is going to be established in Nigeria. The second one will soon be started in Ghana.

Jacobsen: For those who wish to become involved, how do you recommend that they do it?

Mathes: There are several ways to become involved. Individuals have the option to join AAI as a member, volunteer or a board member. We are always looking for active support, and every atheist, who wants to contribute their knowledge and skills is more than welcome to join us.

I would recommend to read the ‘Get Involved’ section on our website to see what would be the best fit and simply fill out and send in the application form https://www.atheistalliance.org/aai-membership/.

Atheist/Humanist Organizations are also very welcome to join us as an affiliate member by filling out the application form: https://www.atheistalliance.org/affiliates/.

Jacobsen: Thank you for the opportunity and your time, Elisabeth.