Blasphemy is a victimless crime, goes the meme. But as is so common with such pithy statements, things are a lot more complicated in reality.

Content warning: I’ll be discussing some negative stereotypes of religious and ethnic groups (Jews and Muslims), and using those stereotypes to illustrate inappropriate forms of “blasphemy”. I will be indicating when I am using a stereotype and how the usage of it is unacceptable, but the examples will nevertheless necessarily be offensive. You have been forewarned.

As much as some atheists want to insist that there is a clear, sharp divide between people and their beliefs, beliefs and believers come as a bundle, and it is absolutely impossible to untangle them. The idea that one can say whatever one pleases with no boundaries, restrictions, or consequences so long as one is “attacking beliefs and not people” is specious nonsense.

The freedom to blaspheme is no different. It is ridiculous to believe you can discredit, sabotage, and ridicule beliefs that people cherish and base their lives on without hurting those believers.

But acknowledging that is not the same as saying you shouldn’t blaspheme because it hurts some people. There is damn good reason to blaspheme. Blasphemy Day is observed in the first place because religious groups want to take away our rights and freedoms, and we need to fight for them. And that is a very legitimate, and very serious fight: just take a look at the Wikipedia page for Blasphemy Day; the “see also” list is half-full of people who have been murdered by mobs for blaspheming (and that list could be a lot longer).

Could be worse; she could have also donated a Quran to the kids next door and triggered the Day Care Crusades.

As with anything, it’s not what you do that determines the righteousness of your actions, it’s why you’re doing it; it’s your reasons and justifications that matter. When you’re blaspheming, if you’re just doing it to hurt people or for the lulz, that’s indefensible. But if you’re doing it to fight back against religious censorship, or for the right to criticize religious beliefs and people, those are good reasons.

So there is the first thing to keep in mind to do blasphemy right: You have to be doing blasphemy for the right reasons. If your goal is to criticize religion or to push back against demands by the religious to strip away our rights and freedoms, you have a good reason. If your goal is just to hurt religious people because you don’t like them… well, you should still be able to do it – assuming the harm you’re likely to cause doesn’t go beyond hurt feelings – but you are not doing blasphemy right. You’re just being an asshole.

But having a good justification is not enough. You also have to make sure that the action you take is rationally connected to your intention. In other words, if you want to blaspheme against Judaism (for example), it doesn’t make any sense whatsoever to use stereotypes against Jewish people. For example: calling Jews greedy, dishonest people who own all the banks and media is not just a bullshit, offensive stereotype, it is also completely disconnected from any criticisms of Judaism, defences of free expression, or anything, other than hate against Jewish people. Any so-called “blasphemy” using such a stereotype has nothing to do with blasphemy. 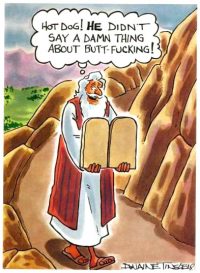 A blasphemy against Judaism that doesn’t rely on stereotypes… unless there are some Jewish stereotypes I’m very not aware of….

You might think that example was a little ridiculous – obviously that’s not blasphemy, it’s just bigotry. True, most people will find that example obvious and heavy-handed… but this kind of thing happens all the time. Especially when Islam is involved. I very frequently see things labelled as “blasphemy” that are nothing more than islamophobic memes: they target (imaginary and usually offensive stereotype) characteristics of Muslims under the pretense of criticizing Islam. Sometimes – perhaps even most of the time – this is done out of ignorance, because most Canadians just don’t know enough about Islam to properly criticize it, so they latch on to whatever feels like a valid criticism… which is exactly the formula for perpetuating ignorant and offensive stereotypes.

So that’s the second part of doing blasphemy right: What you’re doing/saying has to be rationally connected to your intentions.

But even that’s not the end of it. Even if you’re doing blasphemy for all the right reasons, and even if the blasphemy you’re doing reflects your intentions perfectly, it might still not be a good idea.

To understand why, I’ll use the canonical Nazi example: Imagine you’re in Germany in the 1930s. You want to criticize Judaism – and that’s a perfectly reasonable and justifiable desire; Judaism, as much as any religion, deserves to be criticized. But you’re not a bigot or an antisemite, so you craft a blasphemy that perfectly criticizes Judaism while not feeding into the stereotypes or the hate or bigotry against the Jewish people. Well done, you have satisfied the first two requirements of doing blasphemy right. So, blaspheme away, right?

Even if your intentions are pure, and even if your actions perfectly reflect your pure intentions, you can’t simply ignore the environment you’re in. Context matters; context always matters. Criticizing Judaism is absolutely legitimate, but maybe doing it in 1930s Germany isn’t a great idea.

And that’s the third part of doing blasphemy right: You have to consider the potential consequences.

(Honestly, the argument that you can’t predict how your words will be taken is completely absurd on the face of it. One has to wonder what the hell people who make this claim think will happen each time they make a public statement: isn’t the reason they’re criticizing religion publicly in the first place because they believe their words will influence more people to question or walk away from religion? They can predict that might happen, but they’re totally incapable of predicting that someone might take their criticism of religion as justification for violence against the religious? They’ll take all the credit when people walk away from religion because of their words, but no responsibility for any other obviously predictable outcome? And these people are supposed to be “thought leaders”?)

Again, to belabour the point, you can’t be held responsible for what you can’t reasonably foresee… but there is a lot you can reasonably foresee. Someone in Germany in the 1930s will surely have been able to foresee that even their legitimate criticisms of Judaism could be warped by the very active bigot movement of the time, and become part of their justification for violence against Jewish people. Even today, anyone whose head isn’t firmly entrenched up their ass realizes that even legitimate criticism of Islam can and will be seized upon by far-right extremists, and become part of their hate campaigns.

Note that I didn’t say that you shouldn’t say anything if there will be any negative consequences. That would be ridiculous. What I said was: you have to consider the consequences. You have to think about what your blasphemy might trigger, and you have to decide whether or not you’re okay with that.

This is not theoretical for me. As an atheist activist in Canada, I am keenly aware that there are extremist forces that will gleefully seize upon any criticisms I make of religion – and particularly of Islam – and use them as part of their campaigns of hate and intolerance. No matter how well thought-out or legitimate my criticisms might be, that possibility exists. Bigots will happily use any legitimate criticisms I come up with to provide a sheen of respectability over their hate. Every day that I run Canadian Atheist, I live with the very real and very terrifying possibility that the next Alexandre Bissonnette may be a fan of CA or me personally. 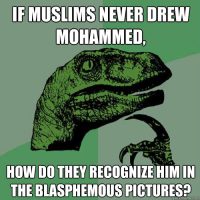 Yes, islamophobia is real, and yes, it is a problem in Canada… but it’s not so bad that we can’t have any fun at Islam’s expense.

I know all this, and yet I do it anyway. And it’s not because I am blind to those potential consequences, or because I don’t care about them. I consider those consequences, and weigh them and their likelihood against the necessity of what I do. I don’t just blaspheme for shits and giggles, I do it to resist religious domination, and to fight for my own rights and freedoms, and those of other atheists in other countries. I blaspheme because I must, both for my own rights, and for others who rely on me to blaspheme for them because they can’t afford to. I acknowledge and accept the risk that some of my blasphemies might be co-opted by evil, crazy, or violent people. I take steps to avoid or minimize those consequences and their likelihood, but I weigh the likely potential consequences of speaking out versus staying silent, and I believe the balance falls on the side of speaking out. That’s what being responsible is about.

That’s how you do blasphemy right:

Note that those requirements aren’t really specific to blasphemy. That’s because there’s nothing really “special” about blasphemy, outside the minds of the religious. Blasphemy is just another form of public speech, nothing more, nothing less, and entitled to all the protections and restrictions of any other public speech. It only feels different to the believer because religion is such a personal thing… and because, deep down, the believer recognizes that their religion is ridiculous and wrong, and can’t stand having that called out. But the bottom line is that blasphemy is nothing more than just another flavour of public speech and social and cultural criticism.

I don’t doubt that some people with walk away from this post thinking: “Indi said we shouldn’t blaspheme as we please, we should censor ourselves”. If that’s all they can manage to take out of everything I’ve written, then fine, I’m okay with them living by that rule.