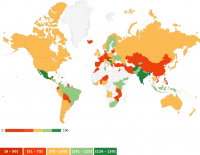 As depressing as it is to be in the middle of the pack, it’s doubly depressing once you realize we were once the gold standard.