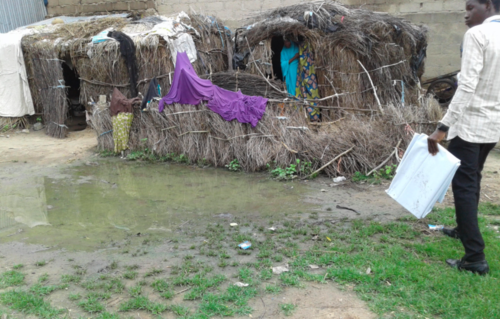 So many people live in difficult, terrible environments and then are thrust into even further utter uncertainty through extremist groups. This happens everywhere to different degrees. One of the nations in which this is a problem is Nigeria, which is with the terrorist group known as Boko Haram.

They have produced many refugees based on the chaos left in their wake. It is a serious issue not only for the nation and communities but also for the future livelihoods of those who are displaced and without homes.

What is it to lose a home? The placeholders of one’s personal story based on the things held in personal storage. The family members in the home, possibly, and the interpersonal connections built through the community. All gone, along with the quality of life of so many people.

In Nigeria, this happened, as it has happened to millions of people around the world due to the steady and erratic work of the extremist groups – often coordinated chaos in a way. Some of the survivors are refugees.

One camp is the Al-amin Dagash IDP Camp, in Maiduguri, Nigeria. It functions with a thatched roof housing construct set. However, when it comes time to rain, which does happen, these refugees are left with leaky roofs.

A proposed solution is tarpaulin to prevent this, for the huts and the refugees who use them. One solution, potentially, is tarpaulin. It is better than thatched roofs. There is a fundraiser, brought to my attention through the Brighter Brains Institute if you have some time and finances. Your help would be appreciated: