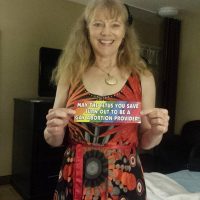 Even if I didn’t love Joyce Arthur as much as I do, I’d still use every excuse I could to show this sticker.