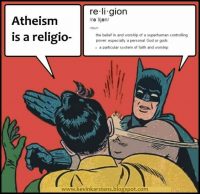 This is not actually the comic where Batman comes out as atheist, but wouldn’t it be awesome?