Yesterday evening I mailed a dozen letters from Canadian Atheist to the members of the Senate’s Standing Committee on Legal and Constitutional Affairs. 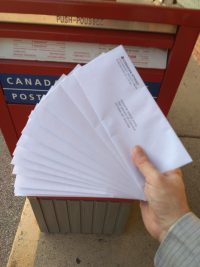 The letters just as I was putting them in the mailbox.

The topic was C-51, An Act to amend the Criminal Code and the Department of Justice Act and to make consequential amendments to another Act. I’m not aware of a shorter title for this bill, and it’s a bill that sorely needs one because it shares an identifier with the infamous spy bill, the 2015 Anti-Terrorism Act. But it’s a bill most Canadian Atheist readers will know about as the blasphemy law repeal bill.

This is the bill that Justice Minister Wilson-Raybould tabled in June of last year. It’s been sloooooowly making its way through both houses ever since.

It got hung up in the Parliamentary Standing Committee on Justice and Human Rights for almost half a year, thanks to an organized campaign by religious groups – acted on by the Conservative Party – to remove the repeal of §176 of the Criminal Code. At the time, I described this as the biggest setback of 2017.

After that, the Lower House finally passed the bill in mid-December and passed it on to the Senate, who debated it for months. None of the debate had anything to do with the blasphemy law repeal; the issues raised included peremptory challenges in jury selection (this comes from the Stanley case, where an all-white jury acquitted the white killer of an unarmed aboriginal man, after a number of aboriginal jurors were prevented from being on the jury), whether it’s necessary to mention “unconsciousness” specifically as preventing consent (the argument is that you don’t need to be literally unconscious to be incapable of consent), requiring defendants in criminal trials to disclose everything they intend to introduce in trial to the accuser (this comes from Ghomeshi case, where Ghomeshi’s lawyers had lots of evidence that contradicted accuser’s claims that was sprung on them in court, making them look unreliable), and Wilson-Raybould’s “Charter statements” (Wilson-Raybould invented the idea of publishing a statement along with each bill tabled, explaining how it interacts with Charter provisions, and she wants to make that practice mandatory). Finally in in mid-June, the bill was passed to the Standing Committee on Legal and Constitutional Affairs…

… juuuuuust in time for the Senate to go on their summer break.

And that’s where things stand now.

It’s 2018, and Canada still has a blasphemy law… but we are so close to getting it repealed. We lost the chance to get §176 repealed – to put it bluntly, religious groups were organized, we were not. But we still have a very good chance of repealing §296 – the actual blasphemy law.

There doesn’t seem to be any real opposition to repealing §296. But C-51 is an omnibus bill, which means that it could be killed for some other, completely unrelated reason, due to one of the other provisions in the bill. Is there anything else in the bill that would justify killing it? I don’t think so. You’re welcome to read the bill yourself and see if you disagree, but the consensus I’ve picked up on is while there are one or two things that aren’t perfect – and that might warrant a follow-up bill – there is nothing that justifies blocking all the good stuff the bill will bring.

Now is the time to make the final push for C-51. You can send an email to any senators you please, or send them a real letter if you like – it’s postage-free. The British Columbia Humanist Association has organized a petition; you can add your name to it. It won’t take much; a very small gesture can make a difference, if enough people do it. And we do have momentum on our side.

I want to stress again that we lost the opportunity to get §176 repealed because religious groups managed to get their voices together and sway Parliament to their will. Let’s learn from that mistake and bring our voices together to put an end to Canada’s blasphemy law.