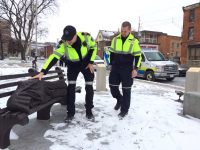 The dude got crucified and was walking around three days later. I’m sure he’s fine.