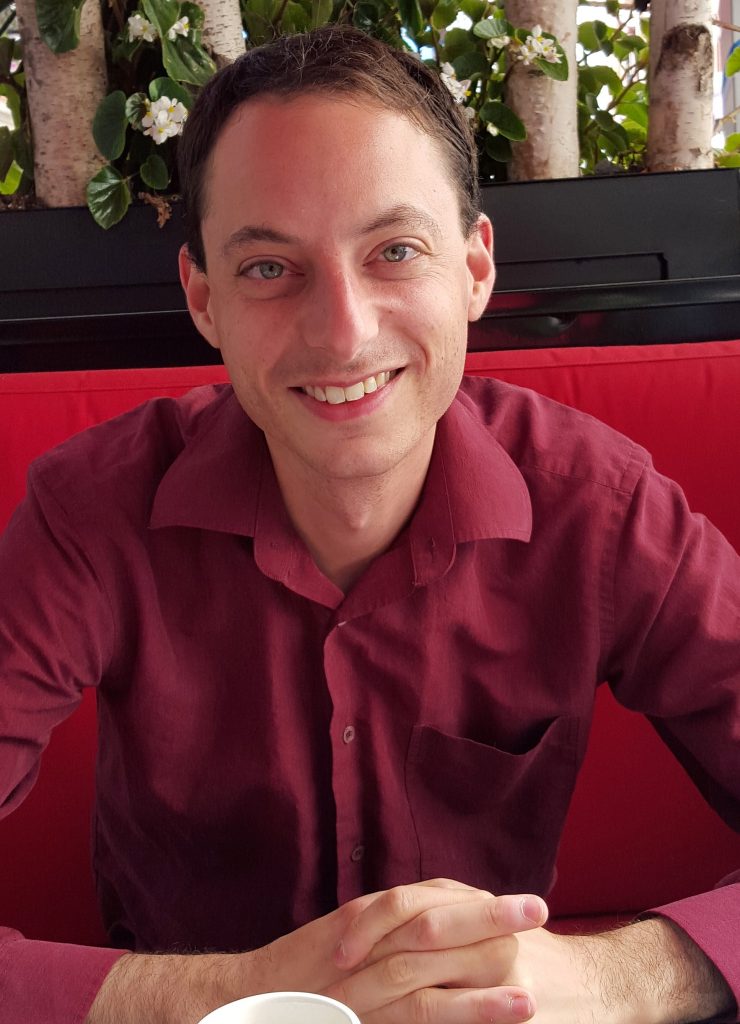 Justin Trottier is Executive Director of the Canadian Centre for Men and Families, a men’s health and social service facility. The Centre is an open, inclusive and space serving as a hub for counselling, legal aid, fathering programs and trauma support groups. He is Founder of the Canadian Association for Equality, a registered educational charity that seeks to integrate boys and men into our efforts to advance gender equality. Justin has played a leadership role in a variety of humanist, secularist and skeptic organizations, appearing frequently in the media advocating for church-state separation, fundamental freedoms and humanist ethics.

There is the crowdsourced funding campaign for their men’s shelter campaign here.

Scott Douglas Jacobsen: Let us start, like a superhero origin story, from the beginning. What was early family background in regards to religion in brief?

Justin Trottier: I was raised in what I would describe as a secular, liberal, Jewish household. Religion was not something emphasized. But I recall, at an early age, having a default presumption that there must be some divine presence in the universe.

Somehow, I came to accept that. I espoused the belief and was raised steeped in that. However, it was not a religious thing. It was a belief in God. Through my teenage years, I became more intrigued by the scientific worldview.

That led me on the path of exploration, which culminated in atheism. I went through different stages. I was questioning things and then became a skeptic, and agnostic. I am still those, but also an atheist too.

By the time I was an adult, I was convinced, very likely, that there was not a God. I have not moved beyond that since that time.

Jacobsen: At the University of Toronto, you founded the secular student alliance there. What was the inspiration for that? Some people will have a mentor at the university, which will help them form a group. Did you have one?

Trottier: Not really, I co-founded the group with a young woman named Jenne Fides. She preceded me because she formed a small discussion group at Trinity College, which is one of the colleges at the University of Toronto.

Trinity College is Anglican by tradition. It is unusual to have an atheist club and to be given facilities to host their meetings. I saw this advertising for this atheist club. I did not see something like this at the university.

I was busy. I was running other student clubs at the time. I had not yet gotten around to an atheist or even a humanist group. When I saw Jenny beat me to it [Laughing], I connected with her. We rebranded this college-based atheist club and turned that into a university-wide secular society.

That is what we made at the U of T, a secular alliance. It would transform into a national charity in its own right and become very active across the country.

Does that amount to one of your intents there with regards to founding organizations like those?

Trottier: You said it quite well. The idea was to provide space – both metaphorically and physically, or have space where non-believers could gather and discuss their position on things. They could enjoy each other’s company and also challenge each other.

A lot of the events we had did not bring in speakers to tell us what we already knew.

Trottier: It was to tell us what the frontiers of science were, about the universe. That can be challenging. We had debates that pitted people from different points of view into dialogue with one another. It was to have dialogue and deepen our understanding of things based out of a safe place where atheists would be welcome.

There would be no dogmas. Nothing taboo, that could not be discussed or debated. That was the principle behind it.

Jacobsen:  With reflection and the distance of quite a bit of time, what were some of the topics, even with that principle of open dialogue, at the time that were ‘hot button’ issues – as they say?

Trottier: That is a good question. Some of the events that got the most interest were the frontiers of science events. We had some interesting events by professors and researchers doing cutting-edge work.

Jacobsen: That is cool.

Trottier: Sometimes, it was so cutting-edge that they did not even publish their work yet. Not so much controversial, it seemed to bring out a lot of people. We had a couple of debates. One was on human rights. Are they a convenient fiction or objectively real?

That was from a York University professor who gave that talk. That got a lot of people out. That was one of the more challenging talks for us. I think most of the room came in thinking human rights were real. That there was not a lot of complicated issues around it.

Jacobsen: The Secular Freethought Centre became Centre for Inquiry Canada. How did that happen?

Trottier: It only lasted for about a summer. It was a little bit messy. Let me back up and be a bit personal, I was a bit at the centre of this for a time. When I graduated from the University of Toronto that summer, I was hired by the Centre for Inquiry to be its campus organizer because of the work I had done at the Canadian Universities.

At the same time, we were given a generous contribution from a local humanist philanthropist in order to begin renting. There were some strings attached to it. He was an older gentleman. He wanted to leave a legacy. He wanted to know that he had opened the first centre for humanists, secularists, and atheists.

There was a local group that had tried to do this for years but had not been successful. They did not succeed. We quickly took him up on this offer. We opened this facility. I was able to continue my campus organizing work. We called it the Secular Freethought Centre. When the Centre for Inquiry had hired me a couple months previously, they wanted in on the action.

It would go on to become a national headquarters for the Centre for Inquiry. I would be hired to serve as its national executive director. [Laughing] I do not know if anyone cares about that history. But you asked the question.

Jacobsen: [Laughing] I care. There are a bunch of branches throughout the country. As an educational organization at the national level, the knowledge of this foundation seems important.

Now, the Westboro Baptist Church, the pastor Fred Phelps is/was notoriously anti-gay. I would assume anti-LGBTQ+ and so on. You hired Nathan Phelps. The son of that pastor, but an estranged son, he headed up a branch of Centre for Inquiry Canada.

Why did you reach out to Nathan?

Trottier: That was one of the proudest things that I did at CFI. It was to recruit Nathan Phelps. He found us. He left the family many years ago. If I remember the story, when he was 18, he flew the coup. He made his way to Canada.

He was a taxi driver. It was in BC somewhere. He happened to have, as one of his passengers in his taxi, a young journalist, probably similar age to yourself, in fact, Scott. They got to talking. The student realized that he really had a story on his hands. He had the son of Fred Phelps driving a taxi in Canada.

He broke this story. It turned out Nathan Phelps was the opposite of his father. He was an atheist, an LGBT supporter, and would become a champion of gay rights issues. This reporter was a member of CAFÉ.

Whether he invited Nathan to contact me or suggested I reach out to him, he was the linchpin in all that. He goes by Nate. I will call him that. He became a volunteer and a branch director and an Alberta member to run our operations.

Jacobsen: How did this relate to Annual Blasphemy Day?

Trottier: This was separate. However, Nate was one of the champion spokespersons for it. That is true. Blasphemy Day was the culmination of one of a few different trajectories that had to do with CFIs response to censorship. One was the Danish cartoon controversy.

I am sure you know well about it. The other one was a little bit more local. It had to do with some Canadian politics around Canadian Human Rights Commissions. At the time, they were claiming a right to, a little bit simplistic but, not offend religious sensibilities.

There were some well-known cases in Canada, where some journalists produced content that was deemed offensive to Muslims. Those few Muslims who were offended – it wasn’t very many, but there were a few – and then complained to the Human Rights Commissions in a couple provinces in Canada.

The Commissions investigated these articles because these were offensive. There were the Canadian angle and the international angle with the cartoons. For some of us, enough was enough; we thought about bringing this day to protect blasphemy, which we call International Blasphemy Rights Day.

I was not involved with them that much anymore, but I was involved in that movement. I was making sure that the Canadian issues were integrated into the founding of those events.

Trottier: I was quite prominent in reaching to the media and getting our campaigns covered in the media. You didn’t seem to have to do very much. There was an appetite. We were lucky. They do not have an atheist organization that they can go to together to get that perspective.

Once CFI came on the scene, we became the go-to naturally. It was a constant interest from the media in all activities. We thought, “What is a big splash campaign that we can do to take this interest, which was largely reactive?”

You cover it and then they come to us. How can we lead a campaign around issues important to us and then mobilize the media to convey that message? At the same time, there was the bus campaign happening in the UK with the British Humanist Association.

We thought that might be the right mix to bring that campaign to Canada and then bringing a Canadian mix. It is running ads in various cities. It was the same ad as in the UK, but then it was turned into a conversation around humanist ethics.

“There is probably no God so stop worrying and enjoy your life.”

Trottier: We talked about the difference between a humanist and a religious ethical and meaning system. We did a number of events and initiatives around that. That was one big advertising campaign: borrowing the theme and the brand from the UK.

That got so much attention. We had more big advertising campaigns. One was completely created by CFI Canada called the Extraordinary Claims Campaign. It was more a homage to Carl Sagan rather than to atheism and humanism.

We had a tagline with it. Our website had dozens of different “extraordinary claims” and giving people evidence for or against the claim. You asked me what spiralled out of the atheist bus campaign. That was one follow-up.

We wanted to do one on skepticism. We also put a couple billboard ads up. We looked at how people practically lived their lives as a humanist. We had some billboards that featured some real live humanists asking them what was important in their lives.

We had hundreds of testimonials on another page from atheist and nonbelievers and getting them to ask what they get their meaning from. It was, in a sense, humanizing humanism.

Jacobsen: Thank you for the opportunity and your time, Justin.