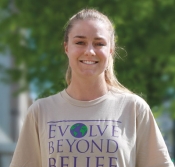 Molly Hanson is the Freedom From Religion Foundation Editorial Assistant. Hanson is a champion runner among many others things and earned the spot at the University of Edinburgh for a Ph.D. in Anthropology. Here we learn about her and her work.

Scott Douglas Jacobsen: How did you find the FFRF?

Molly Hanson: During my senior year of college at the University of Wisconsin-Madison I was looking for an internship so that I could get some work experience in the field I was majoring in, journalism.

During my hunt, I was looking the university’s job listing page and found that the Freedom From Religion Foundation was looking for a writing assistant. I had never heard of the group until then, but after doing a little bit of background research I was found that it’s mission aligned with my personal beliefs and passions and was thrilled to receive the position after applying.

Jacobsen: Amit tells me that you are a champion runner. How did you get into this physical competitive activity and begin to excel at it?

Hanson: I don’t know if I would call myself a “champion” runner, but I did race track and cross country in college and ended with a successful career and I am continuing to run and race. My parents both ran at relatively high levels in college and my older sister was an All-American in track.

So, I was totally proselytized into it, and because my older sister had excelled I felt pressure to do so as well.  Also, I don’t do like to do anything half-way that I’m putting energy and passion into, and I can be helplessly competitive.

Jacobsen: As the editorial assistant of the FFRF, what do you for them? Why are these activities important for the fundamental operations of the organization?

Hanson: A good portion of my work involves my work on our Rapid Response Team encouraging our members to take action on state-church issues. I work with members of our legal staff to track legislation involving attacks on abortion and birth control access, voucher schools, Ten Commandments monuments, city council invocations, etc.

I write up action alerts to members explaining how these issues are church-state separation concerns and ask them to take action by contacting their legislators. FFRF is, at its core, a watchdog organization that works to promote state-church separation and I’m sort of a liaison between FFRF, FFRF members, and legislators to help keep our local, state and federal laws secular.

I also assist Amit in writing press releases about church-state violations taking place in communities around the nation and our victories in stopping these violations. This helps to put media pressure on government institutions to keep religion out of the public arena and flexes our legal muscles to our members and the media, demonstrating what kind of difference freethinkers are making.

Jacobsen: What seem like the positives and negatives of religion?

Hanson: Religion been used to justify slavery, the repression of women’s social, economic and political power, violence against women, witch-trials, vilification of the LGBTQ community, violent wars, genocide, the suppression of science, the destruction of cultures, etc. The list is infinite when you have this make-believe, man-made institution that shapes the morals of individuals and legal systems of societies.

I guess the number one negative of religion is that it judges certain ideals of a certain group of individuals to be sacred, makes it blasphemous to even question those certain man-made beliefs, and makes certain ideas and traits evil. The great tragedy is that we’re 100% sure we have this life and likely only this life. I think religion has created a system in which certain lives are more valued above and thus given privilege to better lives.

As for the positives, I think humans are drawn to a need for a sense of community and belonging that religion provides. And if it helps someone treat others with more kindness and empathy that is certainly a plus. It can be used as a tool to teach moral lessons, I just think it’s a deeply flawed tool.

Jacobsen: You are a Ph.D. candidate at the University of Edinburgh in Anthropology? Tell me about it!

Hanson:  Actually, I’m going to be entering a masters program at the University of Edinburgh in Anthropology and might continue on with a Ph.D. at Edinburgh or return to the United States and continue in a Ph.D. program here focusing on political and legal anthropology with research on matriarchal societies and their religious beliefs.

So, I’d want to research political power structures and sociocultural value systems and how those relate to the perceived power that women have in a society. And more specifically, how male god-centric religions have led to the extinction of matriarchal societies and the power women have been allowed / conceptualizations of power that better serve women.

Because of a lot of what we think of as “religion” are patrifocal belief systems made my men with male, ruler gods, I’m interested in how that has shaped which traits and ideas have been consecrated, which have been regarded as evil, and how that compares to matriarchal societies which may have had belief systems that better served women.

I’ve always been extremely interested in feminism and religion so I’m very excited for this opportunity to dig into some fundamental questions I have about both topics and their role in human history.

Jacobsen: How does the FFRF provide a bulwark in support of the non-religious and the ordinary religion for what both want and that being the separation of church and state?

Hanson: James Madison said that religion and government will exist in greater purity the less they are mixed together and we believe that is absolutely true. The religious community can better practice its beliefs and stay true to its sincerely held theology in its own separate sphere, uninfluenced by politics or government funds.

Government better does its job of providing and protecting all of its citizens by using the power of reason and logic. Superstition has no place in the realm of legislation and we work to enforce that and educate on that. By working to keep government and religion separate we are really helping both institutions.

Jacobsen: What seems like an unacknowledged admirable person within the non-religious community? Someone never mentioned but integral.

Hanson:  He’s dead and has obviously been acknowledged but Thomas Pain was a pretty big deal. I think his atheism has gotten brushed under the rug a bit, but his nontheism was a cornerstone to the arguments made in Common Sense and the Age of Reason, which really ignited the American Revolution and set the foundational ideas of democratic government.

Jacobsen: Thank you for the opportunity and your time, Molly.

One thought on “Interview with Molly Hanson – Editorial Assistant, Freedom From Religion Foundation”