Gustavo Coletti is the writer and director of Gods (original title: Dioses), and he’s made a wonderful offer for Canadian Atheist readers.

I have not watched the film yet, myself (though I intend to), but as I understand it, the synopsis is something like this: The god of our universe is being judged by a cabal of gods. He awaits their judgment in a divine brothel, where he talks with other divine beings, such as Venus and an angel. With these characters, God discusses his relationship with humanity, our relationships with each other, and how we interpret reality and life.

As I said, I haven’t seen the film yet, so I don’t know for sure what the message is, ultimately. (Though, of course, I’ve read reviews that reveal it.) However, Gustavo Coletti is an out atheist, and when he was asked by a film film journalist what he wanted film’s message to be – answered (this is a third-hand translation):

Coletti apparently originally intended it to be a stage play, but he had difficulty with directors and actors backing out or attempting to water down the play, due to finding it offensive. He finally got it made as a film on a shoestring budget, with the help of film school students from Mexico, and premiered it in Tijuana in 2016. 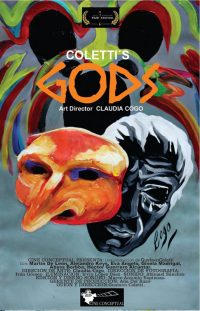 The film has earned good reviews, with praise for the writing. Martín De Leon has been praised for his portrayal of God, as has Eva Angelo for her role as an angel. It also won Best Story and Best Latin Actress (for Eva Angelo, I believe) at the Winter 2016 edition of the Mediterranean Film Festival (MedFF).

It also earned an honourable mention for the 2018 Art, entertainment, or culture story of the year. (Because it was released in 2016 and not 2017, it wasn’t eligible for the prize, unfortunately.)

Gustavo Coletti has graciously offered to allow Canadian Atheist readers to watch Gods… for free! All he asks in return in that we share our opinions on the film. (Note: the film is in Spanish, with English subtitles.)

And once you’ve watched the film, make a comment or post or tweet or whatever about your impressions of the film, and link it back to us. (Or you can just message us directly with your impressions; we’ll make sure they get back to Coletti.)

This offer is only for for the month of April. So don’t wait too long! Again, all you have to do is get in touch with us here at Canadian Atheist and give us a way to send you the access info.

I’d like to thank Gustavo Coletti for giving us the opportunity to check out his film! I’ve already made plans to watch it this weekend.

One thought on “Special offer for CA readers: Watch Gods free this April!”