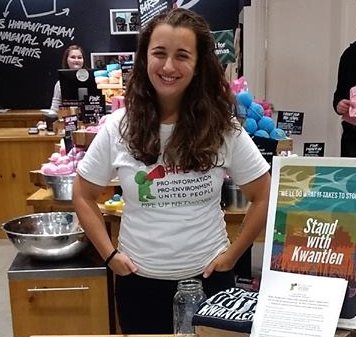 Justine Nelson is a collaborator and friend on volunteer projects, especially writing (here and here) over more than a year or two now. Collaborations started after a smudging ceremony. Nelson is the Coordinator for the PIPE UP Network, works with a variety of non-profits, and an M.Ed. student studying Education for Sustainability. Here we talk about some updates on pipeline issues.

Scott Douglas Jacobsen: Let’s jump straight to the point of the chat today, what are the big concerns and issues for locals, Indigenous and non-Indigenous, regarding pipelines in the Lower Mainland?

The list of concerns is long but ultimately the expansion of the Trans Mountain Pipeline, and as a result of the tar sands, is not in line with the sustainable, just transition to a fossil-free future we envision.

Jacobsen: Regarding the main pipeline of concern, the Kinder Morgan Pipeline, what is its status of construction and progress? How are the current group activists working together?

Nelson: Kinder Morgan is not allowed to start construction of the Trans Mountain expansion on public lands until it meets all the requirements set out by the NEB, which it has not yet done.

At this point the CEO has said they hope to start construction in 2020, we know that is not going to happen. It has, unfortunately, gotten permission from the NEB to bypass Burnaby bylaws and begin the expansion of its tank farm up on Burnaby Mountain.

There is a big resistance to this, and various groups have been challenging the construction. Camp cloud has been up there for months disrupting work, with a group called the Justin Trudeau Brigade.

Last Saturday, March 10, saw the biggest mobilization against Kinder Morgan yet, with up to 10 thousand people coming out to support the Tsleil-wautuths building of a watch house, which is currently being occupied at all times on Burnaby Mountain.

They are exerting their rights to protect the land and water. Groups across the lower mainland, including PIPE UP, are coming together in various capacities to support this work.

Jacobsen: In the case of a spill, which seems relevant right into the present with the Kinder Morgan and other pipelines, what tends to happen to the environment, e.g., the water, the land, the plant and animal life, and the human communities?

Nelson:  Historically we have seen that Kinder Morgan is not responsive to spills. In 2012 when there was a spill at the Sumas tank farm in Abbotsford, it took 6 hours to get a Kinder Morgan operator on the scene.

Local schools had to be evacuated because the fumes from the spill were being inhaled by students, some of whom had to make a trip to the emergency room. This stuff is toxic!

If a spill happens in water Diluted Bitumen is known to sink, making clean up essentially impossible.

One of the most frustrating, and darkly humorous, parts of the spill conversation, is that Kinder Morgan owns a majority stake in at least one oil clean up company. Meaning they make money when oil spills happen.

Jacobsen: We have three arguments, at least: moral duties based on compassion, Indigenous rights (UNDRIP), and economic.

Even if someone is not swayed, at least not in full, by moral duties to fellow human beings’ wellbeing with the risks associated with an oil pipeline spill, and even if someone rejects, at least in part, the United Nations Declaration on the Rights of Indigenous Peoples, what are the short-term, at this point, and long-term economic benefits to rejection of coal, oil, and gas in favour of alternative energy sources?

Nelson: Well, I am certainly not the expert on the economic side. My motivation in this is definitely aligned with Indigenous rights and protecting the earth for future generations.

Projects like Kinder Morgan threaten many employment opportunities in tourism, food production, fisheries, etc. The minimal, and it is minimal, number of jobs created through this project can be found elsewhere if we put more effort into moving towards a clean energy future.

Even Bill Nye pointed out to Trudeau in an interview the other day that it political will that is missing from the transition, not a plan of how to transition. We could do it, the petrostate just doesn’t want to.

With Climate change happening now, the impacts will only continue to get worse, our economy will suffer because of this, and if we don’t start transitioning to a clean energy, resilient community-oriented society, then that impact will only be more exasperated.

Nelson: I think the only thing I would add is that if you feel called to act, now is the time. Go up to Burnaby mountain, support the Tsleil-waututh and other grassroots people organizing and resisting Kinder Morgan’s blatant disregard for the lack of consent for their bitumen shipping pipeline expansion.

Jacobsen: Thank you for the opportunity and your time, Justine.