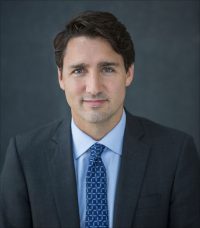 I criticize him a lot, but Justin Trudeau did a pretty good job this past week on several files, so credit where it’s due.