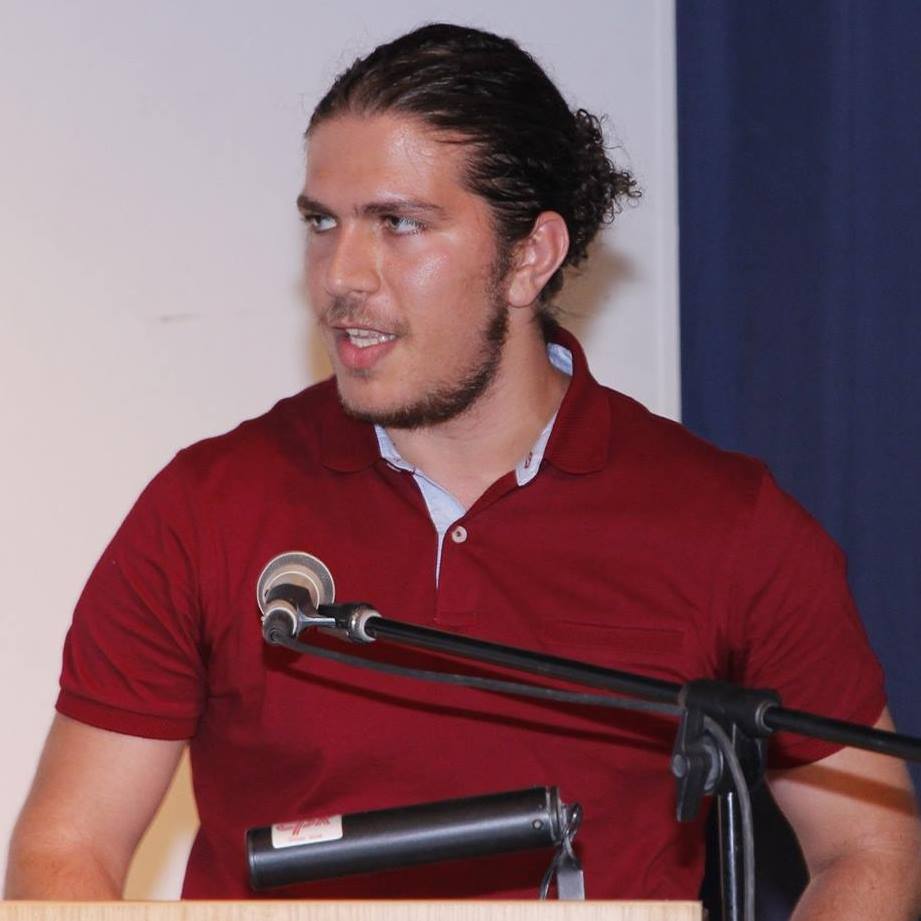 Angelos Sofocleous is an agnostic atheist, skeptic, and the president of the University of Durham’s Durham Atheist, Secularist and Humanist society. Recently, he was elected as the President-elect for Humanist Students in the United Kingdom. I reached out to congratulate him, and to talk about the recent election. He is also a friend and colleague (Conatus News).

Scott Douglas Jacobsen: We’re colleagues through writing and friends through constant interaction and united in common cause in the youth activist sector. Happily, you were elected the president-elect of Humanist Students, recently. First, I want to say, “Congratulations.” Second, I wanted to talk about some targeted objectives and plans for the position. What seem like the bigger areas for advancement of the humanist movement?

Angelos Sofocleous: Thank you, Scott! Very glad to be working with you on a variety of causes in so many different projects. As the position I have been elected to is within a students’ movement, I would like to focus on aspects relating to students. As Humanist Students, we want to ensure that religious students and religious institutions and union societies are not in a privileged position over non-religious students and societies. It’s alarming and sad that this is the case in most universities around the UK. For the sake of having a belief, in this case a religious belief, religious societies, especially societies of the Christian religion, are treated differently from universities and students’ unions. It’s concerning that a student society is privileged simply because of their belief. Of course, this shows an absurdity. The absurdity is revealed once we think of a world where societies of certain non-religious ideologies (e.g. political) are privileged over societies of other ideologies. Imagine if the Marxist, the neoliberal, or the conservative society at universities enjoyed privileges that other societies did not have. That would cause a lot of uproar. But this is not the case with religious societies; they can be in an advantageous position without the student population reacting. This is our job as Humanist Students: React against this unfair privilege that religious student societies enjoy and ensure that non-religious students are treated as religious students are.

Apart from countering privileges enjoyed by religious societies and providing non-religious pastoral support to students, we need to bring humanism into campuses to provide a platform and a community for non-religious students. As I will explain later, this is not to be done in a form of dogmatic introduction, or by presenting humanism as a new ideology (this will be harming to humanism itself), but by presenting an alternative to religious societies and to religious institutions which, in many universities, manage to dominate and, at times control, university policies and practices. As a matter of fact, it has been the case that members of religious societies, in this case mostly Islamic ones, at least in the UK, have attempted to de-platform and rally against certain speakers, accusing them of ‘islamophobia’ and ‘hate speech’. This is the mindset that needs to be overturned at our universities. We should be very cautious about what is ‘hate speech’ at our campuses. There are certainly practices that can be labelled of as ‘hate speech’; but criticizing any religion or any belief system is certainly not ‘hate speech’. Criticizing any ideology is vital for our development as a society and no ideology shall be immune from criticism. If one gets ‘offended’ because their religion, ideology, or belief system is criticized then that’s their problem. However, when speech calls for violent action against a particular group of people then, yes, that is ‘hate speech’. It is vital that we distinguish between the two, so that we are able to not mislabel certain events as promoting a ‘phobia’ against a particular religion or ideology. It is crucial that we keep our universities as places in which thoughts can be exchanged, challenged, and heavily criticized. There is no place for emotions here.

Wishing to give voice to the 73% of young people, many of whom are students, we are structuring Humanist Students in a way in which we’ll have stronger presence in university campuses, battling against religious privilege, and for freedom of speech, equality of opportunity, and promoting critical thinking.

Jacobsen: As a student at the University of Durham, you study philosophy and psychology. You have been the president of the Durham Humanist Students Society since May, 2016. You hold numerous board and executive positions in and for the non-religious community. With these backgrounds, how can we leverage these organizations and publications, and so on, to target those bigger areas with coverage, speaking engagements, political endorsements even, and making the humanist position an acceptable mainstream viewpoint?

Sofocleous: Firstly, I wish to point out that our aim, as I see it, is not to make the humanist position ‘an acceptable mainstream viewpoint’. Let me explain what I mean by that because such a statement can easily be misinterpreted. This is not to say that I don’t believe that the world would not be a better place if people embraced humanism or that we should not campaign for the wide variety of values that humanism endorses. The case, rather, is that there are dangers in viewing humanism as a concrete ideology itself, as an ideology which can turn into a dogma, if managed incorrectly.

Our aim is not to preach for humanism, it is not to try to ‘convince’ people that humanism holds the absolute truth. Doing this, we fall into the trap of the way of thinking that a number of religions, political ideologies, and other belief systems share. We should not view humanism as a set of ideas to which someone can ‘convert to’ or ‘deconvert from’.

We do not want humanism to be treated as ‘any other ideology’. This is simply because respect for other human beings, other animals, and nature is not an ideology. Valuing reason, critical thinking, and logic, over faith, superstition, and belief is not an ideology. Battling religious indoctrination, religious privilege, and Church of England Bishops having a say in politics is not an ideology. Criticizing the atrocities that take place in theocratic nations and campaigning against blasphemy laws and for freedom of speech is not an ideology. We must not, foremost, treat humanism strictly as an ideology.

I can make my case clearer by bringing in the United Nations’ Universal Declaration of Human Rights (UDHR), something that humanism fully supports and endorses. Do we want to hold that the UDHR is a ‘set of beliefs’ which is merely suggestive? Is there any sense in saying that a violent dictator ‘converts’ when they decide to adopt the UDHR? Is ‘preaching’ the right way to establish the UDHR as the ‘mainstream’, as you called it, position? I think that the answer is ‘no’, in all three questions.

We wish to make the humanist position ‘an acceptable mainstream viewpoint’ – but this is not to be done by any mechanism or method employed by religions or other belief systems which can be characterized as dogmatic. That is, we do not preach for humanism nor we do not ‘convert’ people. This is not even an option for humanism.

It is vitally important to understand the points I make above. This is directly related to your question as I see, unfortunately, that many humanist, atheist, secularist, and freethinking organizations become dogmatic and establish a concrete ideology to which all of their members must conform to or they become ostracized. If we, as the non-religious community, want to work together to have an impact in the world and fight for the causes that concern us, we should work according to our values and not fall into the trap of exercising the same practices which we criticize. Those are preaching, hate speech, ostracization.

Jacobsen: In the UK, there are various privileges for the religious. How can the young student population work to overcome these biases, e.g. Bishops in the House of Lords?

Sofocleous: Indeed, there are a lot of privileges that religious institutions enjoy in the UK. In fact, as a non-British, I find it puzzling, and almost paradoxical, that in a country where the population is increasingly non-religious, the Church of England is recognized as the state church in England, operates its own schools, and can affect or decide on government policies, as it holds seats in the House of Lords. The paradox lies in the fact that, while in most countries the religiosity of people correlates with (or is caused by) the involvement of religion in public and state affairs, in the UK the Church of England seems to hold a position in society which does not reflect its actual effect in society.

On a wider level, they can join nation-wide campaigns organized by organizations such as Humanists UK and National Secular Society who very carefully plan and promote campaigns battling religious privilege. Such organizations are doing great and important work in securing freedom from religion and active participation immensely contributes to their causes.

Jacobsen: To found a humanist publication would be a step forward for Humanist Students in general, how do you envision this coming to fruition? How can people help out?

Humanist Students societies members do have ideas and concerns, and do use writing to express themselves. In the absence of a Humanist Students newspaper, though, they look to find other platforms on which to publicize their material. A humanist publication, then, will not only encourage people who do not usually write to express themselves through writing, but will also utilize the vast number of people and societies who wish to present their ideas to the rest of the student population.

Jacobsen: Thank you for the opportunity and your time, Angelos, I had a lengthy conversation with Hannah Timson. You are both highly competent. I look forward to your collaborative efforts to make these plans realities.

Sofocleous: Many thanks for this interview, Scott. I greatly value all the amazing work you are doing and the platform you give to so many people to speak out and express themselves. I am sure we will have the opportunity to join forces again during my term.