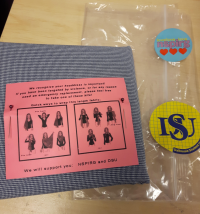 Emergency hijab kit. Yes, this is a real thing.