Behind Crimson Eyes is an Australian post-hardcore band that exploded onto the scene in 2004 and found considerable success early with a couple of very well received EPs, radio exposure, and a top 50 ARIA album.

But their last release was their eponymous second album in 2009. You might be forgiven for thinking they’d dissolved, but you’d be very wrong. While there have been some lineup changes, and a hiatus or two, the band has been been busy performing live shows at just about every major music festival in Australia, and sharing the stage with acts like Iron Maiden, Björk, Rage Against the Machine, Disturbed, P.O.D., Avenged Sevenfold, Bullet for My Valentine, and fellow Aussie band Silverchair. In fact, early this year they came off hiatus again, and started touring with Canadian band Alexisonfire (in their post-farewell-comeback tour) and a fresh lineup: Josh Stuart (vocals), Aaron Schultz (guitar/background vocals), Garth Buchanan (bass), Dan Kerby (drums), and the newest member, Liam Hennesy (guitar).

About now you’re probably scratching your head, wondering why I’m talking about an Australian punk rock band whose last release is almost nine years old. Bear with me.

To hear Josh Stuart tell it, Liam Hennesy approached him with a demo tape in April that reignited his songwriting muse. But it’s not 2009 anymore. As Stuart put it, Behind Crimson Eyes had pretty much done it all when it comes to the whole rock star thing, and he wasn’t enthusiastic about the typical “record, tour, repeat” cycle.

But it was more than that. The world has changed, and the band has grown and learned and lived almost a decade since their last album. There were new families – Garth Buchanan got married and Aaron Schultz had a baby boy – and there were family members lost. The things the band wanted to talk about and focus on lyrically had changed. As Schultz put it:

In the early days we were singing about things like vampires and night terrors, haha… so nothing too serious! With our debut album A Revelation For Despair we really took a dark, but more serious, turn both lyrically and musically. We took some serious issues head on, such as rape, drugs, abuse, addiction etc and approached them from a different perspective which turned out to be quite controversial with the local media [in Australia].

So with the new inspiration burning in them, the band asked themselves: What do we want to do with our platform?

It turned out what they all really wanted to do was: Inspire people to make a positive impact on the world.

That idea alone is pretty vague and could lead to anything, but Behind Crimson Eyes had something much more specific in mind… and much more humanistic. Schultz has promised to share details of the plan in the future… but they’ve already taken the first two steps, and I think you’ll agree that those steps are pretty awesome.

The first step: a collaboration with Peter Boghossian. They wanted someone to articulate their new vision and mission, and Boghossian’s views aligned closely with their own.

This is the result:

As you can see, it came out quite beautifully.

You may have noticed that the video is labelled “Foreword”. But foreword for what?

The answer is twofold. First, in Schultz’s words: “Make It Count” is really sets the tone and is a foreword for this new era of Behind Crimson Eyes. We’re now a band with real purpose, meaning and ambition and this video sums it up perfectly.

But the very awesome second answer is that it is a foreword to Behind Crimson Eyes’s first new track in almost a decade. And that track is “Stardust”, which is inspired by the famous Carl Sagan quote from Cosmos – we’re made of star-stuff – and has the following chorus:

And if you doubt that the message of “Stardust” is humanist, the opening lines of the second verse are: Day by day, we’re getting louder. A call to arms: fuck your higher power. Quoth Schultz:

We’ve had a chance to see just how short, precious and yet amazing life can be. We also realized that we have this platform that we could have been using to make the world a better place all along. We aim to inspire people to maximize their time here on earth, as it’s terribly short, and do things that make you happy and bring joy to others. Lyrically, we want to cover a lot of ground. Politics, human rights, ethics, science, and of course religion. With “Stardust” we touch on the latter two by trying to motivate people to live life for the now, not based on the prospect of an “afterlife”. I think we can agree that religion is one of the greatest evils in the world and we will definitely get to that in our next track.

(Behind Crimson Eyes’s next track might be titled either “Say Bad Things” or “When You Say Bad Things”, and it seems like it might be about the unsolved murder of Sister Cathy Cesnik … who might have been murdered to keep her from reporting the sexual abuse happening at a Catholic all-girls high school. Whether this is the track Schultz is hinting at or not, we’ll have to wait until January to see.) 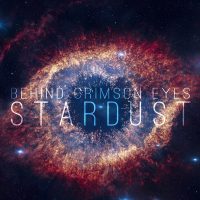 A long-time coming, kick-ass new track from a great band all about secular humanist philosophy… all this on its own would be awesome enough, and certainly worth a CA. But there’s still more!

That’s because 25% of the proceeds from “Stardust” – and all upcoming Behind Crimson Eyes releases – will be donated to charities associated with the theme of the song. For “Stardust”, that’s two charities:

Yeah, that’s right. If you buy the single, not only do you get a long-time coming, kick-ass new track from a great band all about secular humanist philosophy… you also contribute to cancer and dementia research.

All of which aligns perfectly with Behind Crimson Eyes’s new mission: a grander ambition to inspire people to make a positive impact on the world; to improve the happiness and wellbeing for everyone, now, and in the future.