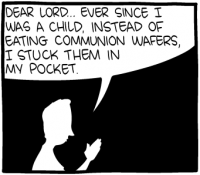 This could be the start of the most awesome sex confession ever.

This week, the Update is going to have a slightly different format. That’s because the big news this week of the passing – not just of Gord Downie – of Bill 62 in Québec. Bill 62 bans having one’s face covered when giving or receiving public services, and Justice Minister Stéphanie Vallée has already confirmed that means everything from entering a school, to riding a bus, to getting treated at a hospital. To dodge the obvious accusation that this is intended to target Muslims, she has additionally stressed that the ban also covers bandanas, hoodies, and sunglasses. You can buy that if you want, but the Bill actually says it’s about “religious neutrality” in the title, so it falls squarely in Canadian Atheist’s wheelhouse.

So first I’ll list the items not related to Bill 62, and then after that, a focus on Bill 62-related items.

Now, onto this week’s big news.

The first few reports of the Bill:

The responses of other politicians:

The responses of some of the victims:

And numerous other writers published opinions:

Canadaland offers some context about why the ban is so popular in Québec:

Ania Onion Bula pulls the rug out from under the absurd claims that this is about helping vulnerable women: