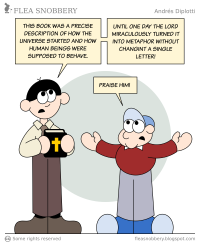 And then the Lord also made the exact same words in the book both a perfect guide to morality and a grotesque celebration of the worst Bronze Age inhumanities!