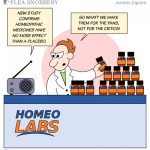 The funniest part of this comic for me is the idea of homeopathy “labs”.