This is apparently a thing ARI does every few years, having done it in October 2013, and back in 2009 – before ARI, back in the days of Angus Reid Global.

ARI’s focus across the series seems to be mostly on the divide between Québec and the rest of Canada (ROC). I’m not really on board with the Québec-baiting that seems to be so fashionable of late, but unfortunately, while the newest report includes overall numbers, the previous report only reports ROC-versus-Québec numbers… so I really can’t get around singling out Québec a bit. I also have to note that the latest survey was done between February 16th and February 22nd… smack dab in the aftermath of that incident. So, yeah.

There were three questions in the survey:

Let’s start with the opinions on religions.

There’s a couple things I want to note before getting into the details here.

Finally, this question is subtly different from the one asked in their 2015 survey, which I covered. But I think the difference is very important. The 2015 survey asked, essentially, “how do you feel toward the following groups?” (and then listed “Muslims”, “Hindus”, etc.). This survey asks, “what is your opinion of the following religions?” (and then lists “Islam”, “Hinduism”, etc.). Catch that? One is asking how you feel about the people. The other is asking about the faiths. This is a critical difference; I, for example, would probably feel “neutral” toward all the groups (that is, the people), but probably at least “moderately unfavourable” toward all the religions.

Also, you’ll probably notice, no form of nonreligion was asked about.

So here’s what it looks like overall, also showing the results from the previous two surveys: 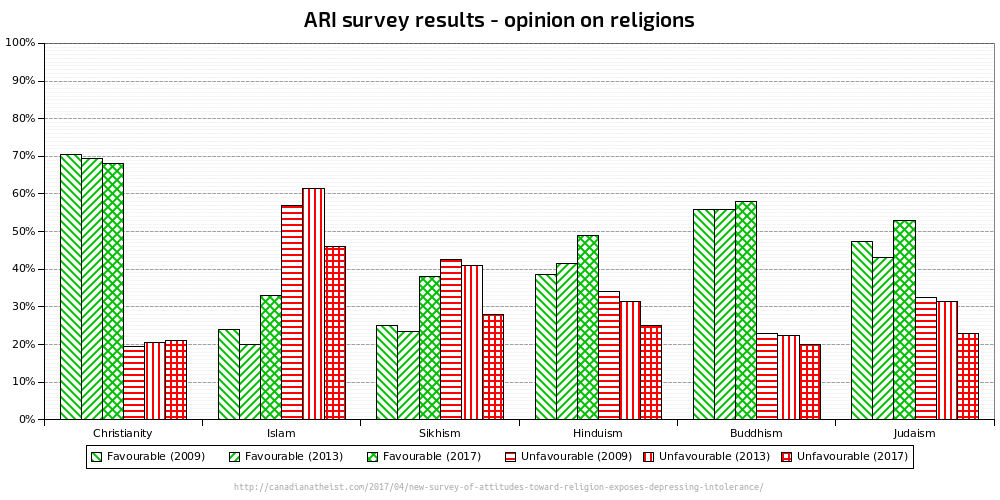 The big story is Islam. It’s the only religion that is viewed more unfavourably than favourably, and its been a pretty turbulent ride for Islam. The ARI report notes that the wild swings are pretty much entirely due to Québec, and I can’t dispute that – at least not with the limited dataset I have. Québec’s favourable numbers have doubled between 2013 and 2017. Of course, that may just be a knee-jerk uptick given that the 2017 survey was done right after the Québec City mosque shooting.

As you can see, for most religions, “moderately favourable” is the most popular option – and I suspect only that because there was no “neutral” option. The only exceptions are Christianity and Islam. Christianity has a high “very favourable” score, which mostly comes from (in rough order of largest to smallest influence) older Canadians (65+) – notably women 55 and older, Conservative Party voters, and Saskatchewan. Islam’s “moderately favourable” score is also high, but it’s tied with its “very unfavourable” score. That unfavourable balance seems to come mostly from Conservative Party voters, Alberta, and males 35 and older… but, surprisingly to me, the most antipathetic toward Islam are: Green Party voters. Huh, who’d’a thunk it?

BC and Alberta have the strongest opinions about religion, with BC more generally favourable and Alberta more generally unfavourable; British Columbians really like Sikhism and Buddhism, while Albertans really dislike Islam and Sikhism. Since Québec is the focus of the ARI report, I’ll mention where it stands: Québec is actually pretty much inline with the overall average opinions about most religions – yes, even including Islam… except for a surprising uptick in antipathy towards Judaism. 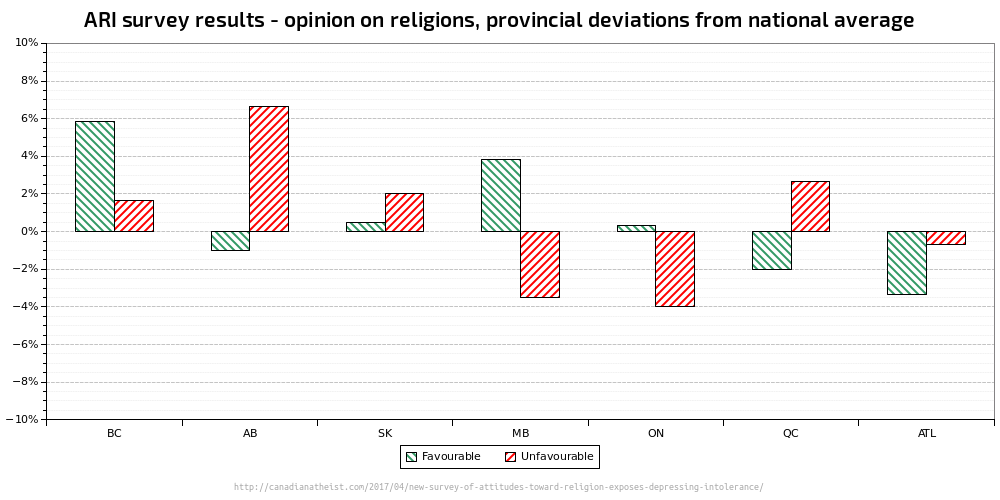 When it comes to age, younger people have more favourable – and less unfavourable – opinions, generally. In fact, the youngest age group – 18–24 – has much higher levels of favourable and much lower levels of unfavourable than the average for all religions… except Christianity. For them, Christianity is the only religion they find less favourable, and more unfavourable, than the average, though only slightly. It seems the people with the lowest opinions of religion are in the 35–54 range. Though, surprisingly, it’s not really Islam they dislike – it’s Christianity and Judaism, followed by Hinduism and Sikhism. It’s not until you get to the 65+ cohort that you start seeing crazy-mad love for Christianity and Judaism, and real dislike for Islam.

One result that surprised me was that higher education correlated to significantly more favourable views of religion, and less unfavourable. That was true for all religions, but especially for Hinduism and Buddhism.

Now we come to what is perhaps the single stupidest controversy in Canada: the wearing of religious accessories.

And if you’re one of those people who only wants to dictate what people wear if they work for the government – and not for the general public – well, that’s still stupid, but that’s not what this survey asked about. The question was merely: Do you support or oppose people wearing each of the following religious symbols or clothing in public?

To be fair, the survey doesn’t specifically ask whether one supports or opposes people’s right to wear these accessories in public. So it is possible that people interpreted it as “even though people should certainly have the right to wear the item, do you personally agree with it as a fashion choice?” But practically, that seems unlikely – more likely people would interpret being asked if they support/oppose wearing an item, as actually supporting/opposing other people wearing them.

For the sake clarity, the survey provided those who want to dictate what others wear with a handy chart, so they could more accurately control other people’s clothing choices. It was similar to this: 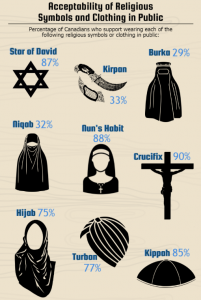 Respondents were allowed to choose whether they “strongly support” (SS), “support” (S), “oppose” (O), or “strongly oppose” (SO) people wearing each item in public. Note, no “don’t care” or “not sure” option at all.

The results are mostly positive, as shown on the chart below (“total support” is the combination of both “strongly support” and “support”, and the same goes for opposition): 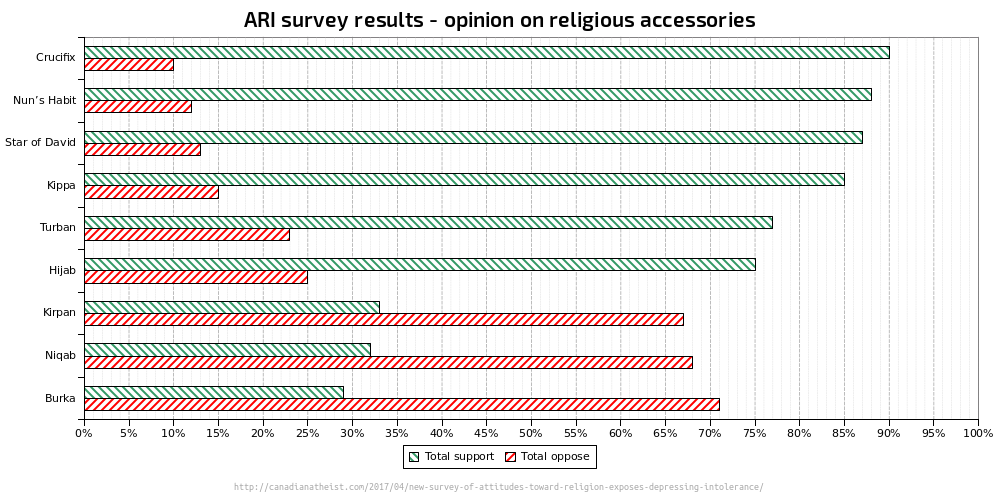 For most religious accessories, at least two-thirds – up to 90% for crucifixes – support people wearing them. The exceptions are the burqa, niqab, and kirpan. Which is understandable – they are the only three items on the list that have practical consequences to other people, not just the person wearing them. (Wearing a burqa/niqab can make identification difficult, and the kirpan is a knife, ceremonial though it may be.)

Digging a little deeper, though, it turns out Canadians don’t really care all that much. In fact, none of the supported items are all that strongly supported. And of the opposed items, the kirpan is slightly less strongly opposed than merely opposed. Both the burqa and niqab are rather strongly opposed, though.

Of those accessories that are generally opposed, most of the opposition seems to come from – in order from the strongest opposition – Green Party voters, older Canadians, Québécois, Conservative Party voters, males 35 and older, and uneducated people.

Who your children marry

The last question on the survey has to be the most offensive. It asks: Would it be acceptable or unacceptable to you if one of your children were to marry a person who was a follower of any of these religions? (Then it lists the same six religions from the first part.) Yeah, seriously. It asks that question. In 2017.

Even more disturbing was the way people answered it. Brace yourself: 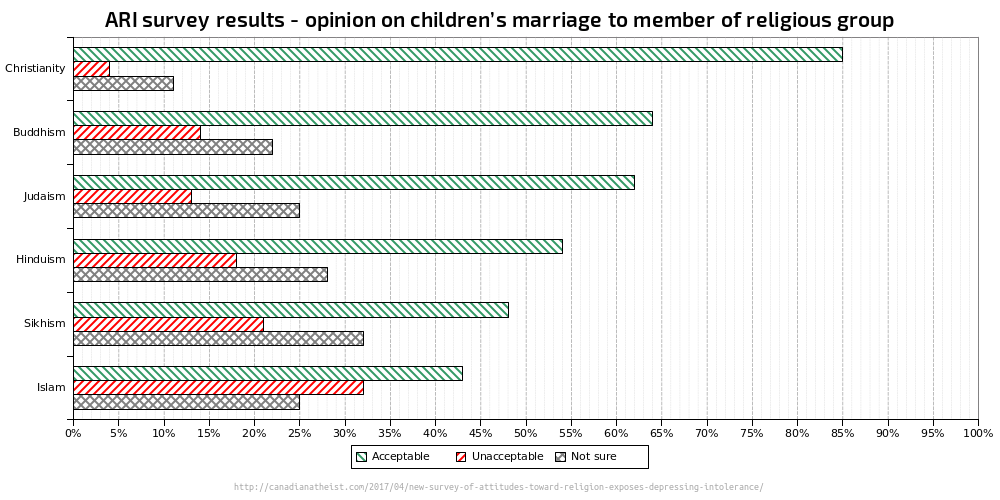 Yeah, that’s pretty depressing. Except for Christianity (natch), less than two-thirds of Canadians would accept one of their children marrying a member for any of the religions asked about. In the case of Sikhism and Islam, it’s less than half. And almost a third of Canadians think it would be straight-up unacceptable for their child to marry a Muslim. Oh, but I’m sure that’s just totally reasonable criticism of Islam </sarcasm%gt;.

Overall, this survey isn’t really as interesting or useful as ARI’s 2015 survey (though that may have been mostly due to the involvement of the University of Lethbridge’s Dr. Reginald Bibby). It doesn’t really give much information that is new or surprising to anyone who’s been following these trends, and what information it does give is pretty useless from the perspective of people who care about policy.

It does give some insight into attitudes. What it shows is generally depressing, but it’s hard to take it seriously, because the allowed answers don’t really allow much room for the standard “live and let live” Canadian attitude. Not allowing that option has probably skewed the results to the point where they’re practically useless. For example, 25% of Canadians oppose (14%) or strongly oppose (10%) the hijab… but what does that mean? Does it mean they just don’t like it, or that they actually want it banned from being worn in public?

The one marginally interesting insight it does give is profoundly disturbing: that large chunks of Canada think that who their adult children marry is any of their fucking business.