Today marks the North American release of the 2015 film My Scientology Movie, a documentary about Scientology… with an interesting twist. 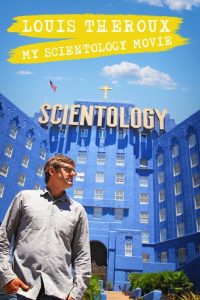 It goes without saying that any documentary about Scientology by non-Scientologists is not going to be done with the blessing of the Church. Interviewing heretics pretty much assures that. Scientology documentaries in the past have had to make do with interviewing heretics and critics of the Church – and thus only showing one side of the story – or filming their (ultimately fruitless) attempts to get Church leaders on the record.

Theroux tried a very different approach. He contacted the Church of Scientology and asked if they would participate in his documentary; he got the predictable “no”, but what he actually accomplished was making sure the Church knew what he was up to: filming a documentary about them featuring some of their most troublesome critics right under their nose. After that, Theroux simply had to go ahead with what he said he would do… and just wait for Scientologists to do what they always do when presented with a challenge, with Theroux ready to capture it all on film.

Now, Theroux claims that he initially wanted to get the Church on the record, hoping to be the first journalist to see another, more positive, side of the church. Maybe, maybe not. The end result is unsurprising – perhaps even inevitable. Cranks spill out of the sewers and begin harassing and threatening the crew… and they get it all on film. One incident went viral even before the film was released, when former senior executive Mark “Marty” Rathbun had just arrived in Los Angeles for the film was accosted arriving at the airport by three high-ranking Scientologists:

Another unique and interesting thing the filmmakers did was try to understand what Scientology feels like, in practice, by using actors to play out recreations, guided by Rathbun. These sessions have to be seen to be believed, not just for the loopiness of the logic behind absurd practices like “bull-baiting”, but also for the visceral, disturbing realizations of how it must have felt for some of the people actually involved.