Pew Research Centre recently released the results of a group of surveys asking respondents worldwide a question about what “national identity” requires. Canada was included in their results.

The survey was carried out in spring of 2016, in Canada, the United States, France, Germany, Greece, Hungary, Italy, Netherlands, Poland, Spain, Sweden, the United Kingdom, Australia, and Japan. The question – which varied slightly depending on the country – was basically:

In the case of Canada:

(Note: if you’re comparing the results of other countries, bear in mind that they don’t all use “Christian” as the denomination. In Italy, Poland, and Spain, they used “Catholic”, and in Japan, they didn’t even ask the question.) 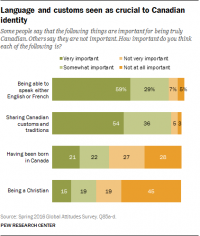 Overview of the results for Canada.

Comparing ourselves to the States is a national pastime, so how do we measure up? Well, the US is around ~70% Christian (using Pew data from 2014; the US doesn’t ask about religion in its census), compared to our 67%. But 32% of Americans think being a Christian is very important to being American, compared to only 15% of Canadians thinking the same thing about being Canadian. That’s more than double, but what’s really interesting is where that extra 17% comes from. You see, 45% of Canadians think religion isn’t important at all to national identity… but only 31% of Americans say the same. In other words, there is a 16-17% difference between Canada and the US all almost entirely at the extremes. In fact, the US is characteristically polarized on the issue, while Canada shows a pretty regular tendency toward lack of interest in religion.

How Canada and the US compare in their belief of how important being Christian is to national identity.

As an amusing aside, 70% of Americans think it’s very important to speak English in order to be American… even though English isn’t actually the official language of the US. Compare that to only 59% of Canadians thinking the same about our two official languages.

So let’s look at the bigger picture, starting with faith. Here is what it looks like in the surveyed countries, when asked how important being a member of the dominant religion is to national identity: 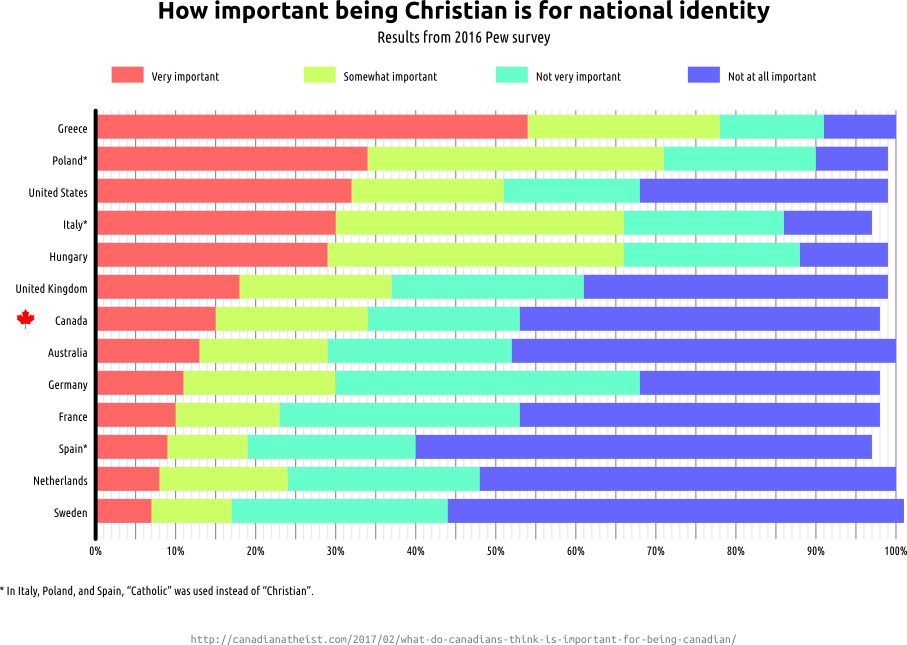 How important being part of the major religion is to national identity.

Canada sits smack dab in the middle of the pack, but that position may be a bit misleading. There is a sharp divide between Hungary and the United Kingdom: over a ten point drop in “very important”, and almost a thirty point rise in “not at all important”. (The US is a bit of an outlier because, as noted above, it is extremely polarized.) Below that divide, belief that religiosity is part of national identity falls leisurely.

One heartening note is that when you compare the chart above to the following charts, it turns out that having a particular religion is generally much less important than the other criteria. Greece is the only exception – Greeks think being Christian is more important to being Greek than being born in Greece – but even they don’t buck the trend all that significantly. 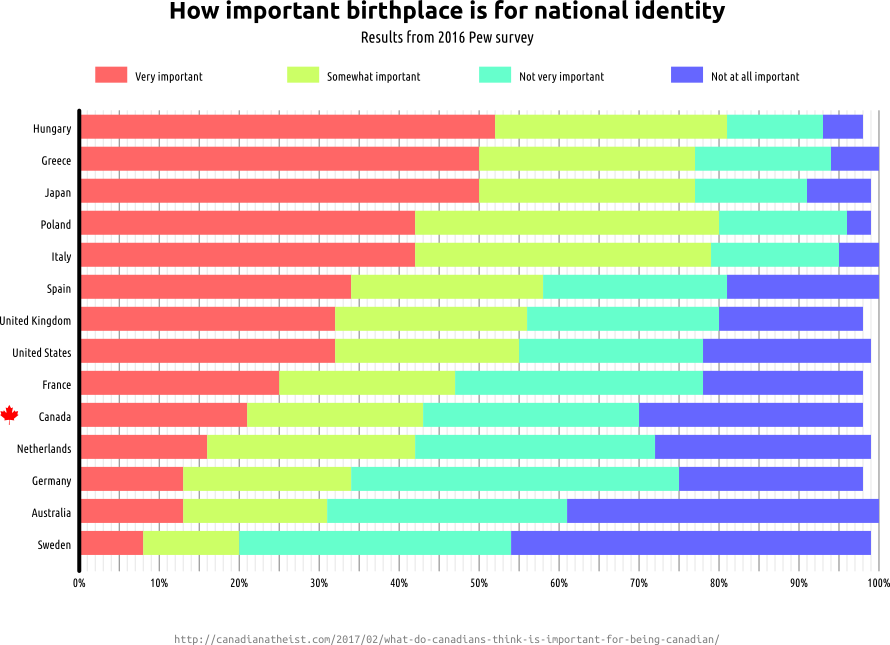 How important birthplace is to national identity. 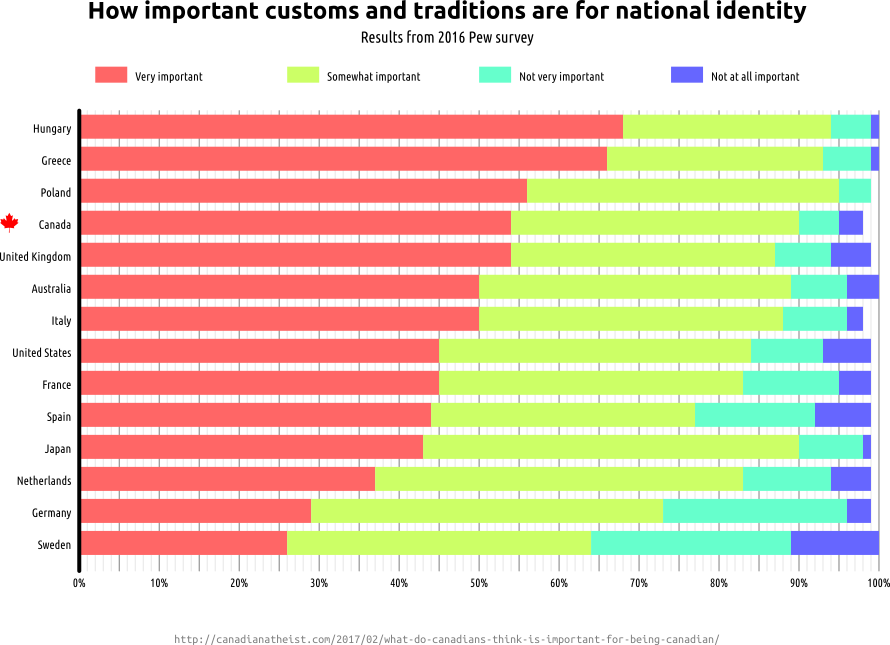 How important sharing customs and traditions is to national identity.

But while Canadians give more weight to sharing customs and traditions than most other countries, the number one “very important” criteria everywhere – including Canada, though it weights it less than other countries – is sharing a language: 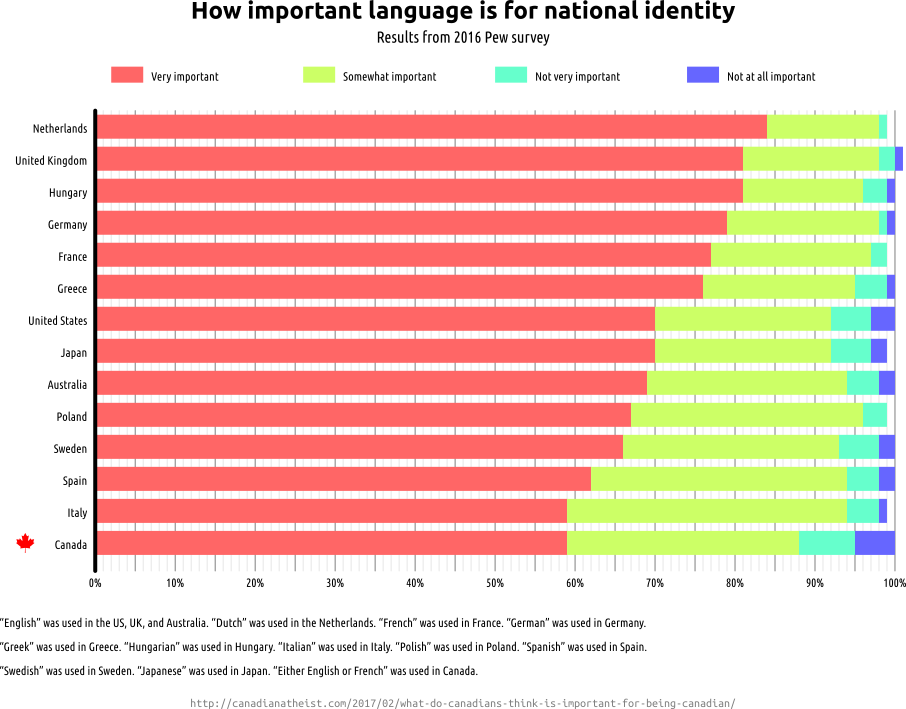 How important speaking the major languages is to national identity.

Although the raw data isn’t readily available (yet), the Pew report does go a little deeper into the findings.

With regards to being Christian, opinions break down demographically pretty much as you’d expect: The Canadians who think being Christian is important are generally older, less educated, and right wing. In particular, being older and leaning right politically really matter – over four times as much in either case: 25% of people aged 50+ think it’s very important (recall the average was 15%) versus 6% of 13–34 year-olds; 21% of people on the right versus 5% of people on the left. 22% of Canadians with a high school degree or less think it’s important, versus 10% of Canadians with higher education.

Things are also much as you’d expect when it comes to being born in Canada. It matters almost three times as much for people with less education (33% for high school or less, 12% for higher education – the overall average is 21%), and twice as much for older Canadians (28% versus 13%). There’s also an almost ten point difference between the right and left (24% versus 16%).

It turns out there isn’t really any difference in opinion on how important language is for national identity between anglophones and francophones. It does seem, though, that political orientation matters quite a bit. 59% of Liberal supporters think speaking English or French is very important – same as the national average – but 68% of Conservative supporters feel that way, compared to 53% of NDP supporters.

The left-right divide is even starker on the question of customs and tradition. The national average is 54%, but 65% on the right say customs and traditions are very important, versus only 37% on the left. There’s a twenty point difference between ages 50+ and 18–34, too (61% versus 41% respectively).

The most important question that wasn’t asked is the one that became a hot political issue in Québec three years ago, and is now at issue again in the federal Conservative leadership race. That is the question of how important shared values are, and precisely which values need to be shared to be Canadian.

There aren’t really any major surprises in the results – at least not for those who study these kinds of attitudes and values surveys frequently. Canadians seem to value shared language and shared customs and traditions much more so than being born in Canada or having the “right” faith, but all of these things are much more important to older, less educated, politically right-wing Canadians than to younger, more educated, left-leaning Canadians. Broadly speaking, Canadians seem generally more tolerant of allowing different people “into the fold” than most other countries. It might seem a bit disappointing that 34% of Canadians think being Christian is very or somewhat important to being Canadian… but bear in mind two things: First, 67% of Canadians are Christian, so only half of them think that being Christian actually matters to being Canadian. And more importantly, a whopping 45% said being Christian was not at all important… a clear plurality, and just shy of a majority.

What really should be important for being Canadian? What do you think? Leave suggestions in the comments.

One thought on “What do Canadians think is important for being Canadian?”