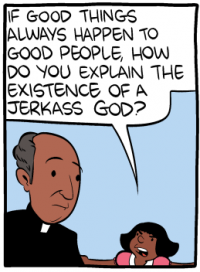 Well, the existence part is difficult to explain, but at least the jerkass part is easy.