The Catholic Church is a hive of hypocrisy. And the sky is blue.

CBC Radio’s January 10th edition of the The Current featured a documentary called God’s Closet, about gay priests in the Catholic Church, and the Church’s stand on homosexuality. 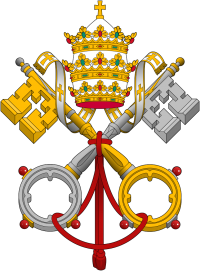 Some of the facts and numbers were surprising even to me. Apparently, around 15% of American priests self-identity as gay… but there are estimates that that actual number may be as high as 70%. And it’s apparently a pretty open secret in the Vatican:

Robert Mickens: All I wanted to be was a good priest.

Megan Williams (voiceover): But when he was in his final year as a seminarian in the US, he began a relationship with a fellow seminarian. That took him by surprise.

Robert Mickens: I never― I was a hockey player. I― My father was a construction worker. I was― I didn’t ever play with dolls or anything when I was a kid. I never saw myself as fitting any kind of gay stereotype. And I was probably very afraid of it, as I think of it now.

Megan Williams (voiceover): Robert spoke with some older priests about it; one who was gay himself. They tried to convince him that it was just a phase, and even told him he should marry a woman. By this time, he was studying here in Rome and had fallen deeply in love with another seminarian. After months of torment, that’s when he took the step of leaving the seminary, and the easier one of stepping out in Rome.

Robert Mickens: … starting to go to gay places, you know, clubs, nightclubs, and the beach …

Megan Williams (voiceover): What he discovered, was just how many gay men there were at the Vatican.

Robert Mickens: … and I was running into all kinds of priests, and even seminarians – people that worked at the Vatican. In gay bath houses; I would meet priests there. I’ve met people who are bishops today. I pity these people because I know that they must live― they live double lives. I don’t know how they do it. I think people end up self-destructing. There’re also, I think― I know a number of priests who have partners, or special friends, from various stages of platonic to full-blown, almost like husband and husband relationships, you know? The church, and certainly the Vatican, is an extremely homoerotic place. Take a walk through the Vatican museums; it’s all male genitalia all over the place. I mean it’s quite something. I mean, if you think― and, look at the rituals, the young men who sing at these things. It’s all men up there. And they bring out the pretty ones, you know. Look at the bishops; look at who their secretaries are. Always― it’s always the pretty one. And they’re blind to it. There’s nothing going on, but it’s eye candy; they love surrounding themselves. They wear dresses, for God’s sake, and, and―. It’s very homoerotic.

Megan Williams (voiceover): But, says Mickens, dare to own it publicly at your own peril.

Robert Mickens: In the Vatican, it’s basically: As long as you’re discreet and you don’t get caught…. But once you do, you’re all on your own. We’re not going to help you.

The documentary also looks into the impact the Church’s regressive policies on homosexuality have on future priests, creating a cycle of same and self-hatred that perpetuates the problems.

Watch out for Toronto’s Thomas Collins dodging the issue by saying that the Church’s policies don’t need to change… all that needs to change is the language they use. As if that would actually fix any of the problems. I suppose it would fix the problem he cares about, which is just public perception of the Catholic Church.

The audio of the documentary can be found on the segment’s page, or on the podcast page.