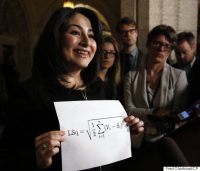 Yet somehow the Trudeau government manages to approve two pipelines, despite how much more complex pipeline flow equations are.