If you live in or near the GTA, here’s something you might want to put on your calendar. Coming up in January is a comedy by an award-winning Canadian playwright about misogyny and religion. 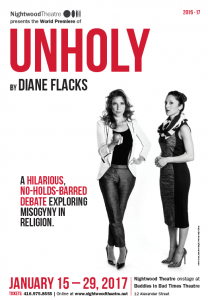 The play is Unholy, and it takes the form of a fictional, spirited debate between four women on the question: “Should women abandon religion?” The characters are: a feminist Muslim and an Orthodox Jewish spiritual leader arguing that women should stick with religion, and an excommunicated nun and a lesbian atheist pundit arguing that they should walk away. As I understand it, the discussion will be fiery, and will pull no punches, but at the same time should be insightful, witty, and hilarious.

Unholy is written by Diane Flacks, who has a string of acclaimed solo plays under her belt – most famously, perhaps, is Random Acts, which was made into a CBC TV special. She also has a number of successful collaborations, such Sibs, which she co-wrote with Richard Greenblatt, and which was made into a CBC movie in 2003. She’s the creator of two CBC TV series – P.R. (2000–2001) and Moose TV (2007) (starring Adam Beach, just before his turn on Law & Order: SVU) – and has written for several others, including the subversive Baroness Von Sketch Show (2016–), and The Kids in the Hall (1994–1995), for which she was nominated for an Emmy.

The play is being put on by the Nightwood Theatre company, Canada’s longest-running and most influential women’s theatre company. Nightwood has produced several noteworthy plays, such as Ann-Marie MacDonald’s Goodnight Desdemona (Good Morning Juliet) and Djanet Sears’s Harlem Duet, which won the Governor General’s Literary Award in 1998. Nightwood and Flacks have collaborated successfully before, on her solo shows Bear With Me and Random Acts, and the acclaimed Smudge.

Unholy will be running from 15 – 29 January at one of the venues owned by the Buddies in Bad Times Theatre company (itself perhaps Canada’s most notorious LGBT theatre company).

Not having seen the show myself, I can hardly tell you much about how the discussion unfolds. However, with someone of Flacks’s calibre writing, it can hardly be dull. Flacks has touched on the intersection of religion and feminism before, but it sounds like in Unholy she’ll be letting her angry atheism (her words) off the leash. Margaret, one of the characters, is quoted as saying:

Organized religion has a lot to answer for, and it won’t, unless we – we women, who have been in the shadows – are brave enough to stand in the light, and ask the question.

But my favourite comment from Flacks giving us a taste of what to expect is her response to the following interview question:

Interviewer: Did you find, in your research, any religion or religious approach that did dovetail with feminism harmoniously?

I believe tickets are on sale now, and I would love it if someone more familiar with the topic of feminism and religion and thinking of attending would get in touch with me. I would like someone to take part in post-show discussions about the show and the issues it raises, and then write about it here.

5 thoughts on “Unholy: a play about misogyny and religion”