This week’s theme seems to be: global warming. 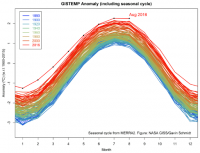 The last two months have both been the hottest months on record.