Just one of many “Jesus LOL” memes.

In honour of the day, and to protest the fact that we still have a blasphemy law in Canada, I’d like to open the comments to our readers, and invite them to post the most hilarious blasphemies they can come up with, or have observed on the Internet.

I’ll share some images and jokes to get things rolling: 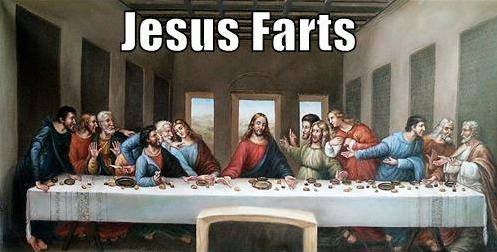 Blame it on all those loaves and fishes.

This is a long one, but worth it. Plus, it’s even educational!

Kinda puts it in perspective, doesn’t it?

Jesus said to God. “Dad, if I really have to go to Earth to live as a human man, then I want to be hung like this,” and he spread his arms as wide as he could.

The rest is history. (Or rather, fiction.)

Because when I burn that shit, I get stoned.