It’s been a long time since I made a comic. I was looking for an excuse to make one, and I found a news story that jumped out at me. 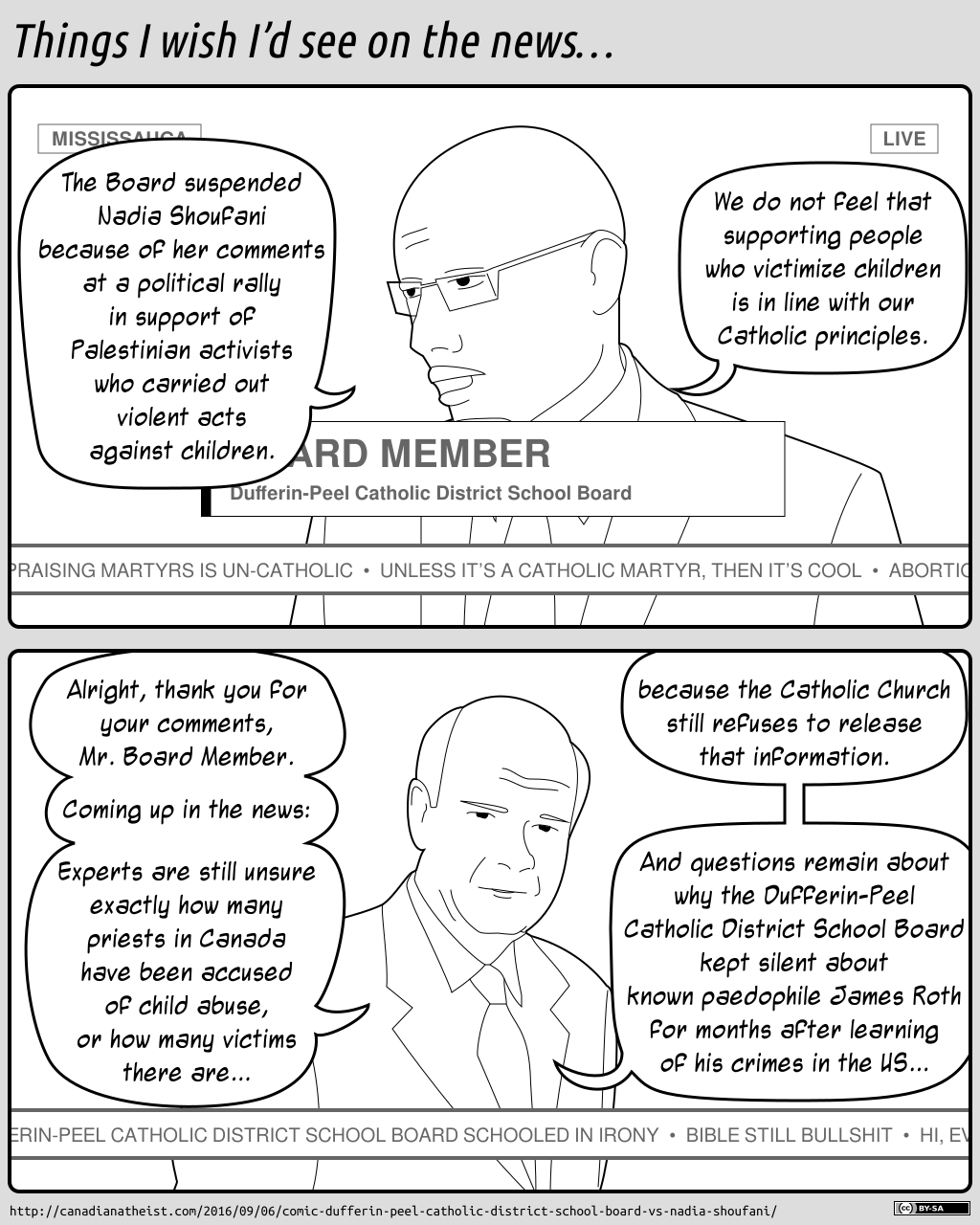 If you haven’t heard of this story, Nadia Shoufani is a teacher at St. Catherine of Sienna school in Mississauga. Back in July, Shoufani spoke at the International Quds Day rally in Toronto. Al-Quds is the Arabic name for Jerusalem; al-Quds Day is basically all about protests against Israel – its policies and even its existence.

Shoufani’s speech (which you can view below; I’ll link to the video) is pretty typical protest fare. The thrust of it is that making peace with aggressors and occupiers is ridiculous, especially while the aggressions and occupation continue, and that violent resistance is justified against them. As she says in her opening words, Silence in situations of oppression and injustices is a crime against humanity. (The second half of the speech is mostly about extended unjustified detentions of Palestinian militants and activists.)

The Canadian arm of B’Nai Brith was present at the rally. For years, B’Nai Brith has been calling for al-Quds Day rallies to be banned in Canada, under the logic that they encourage hate speech and terrorism. Every year they attend and take notes about what is said.

This year, B’Nai Brith took particular interest in Shoufani. They recorded her speech and posted it online (that is the video I’ll link to), and then filed complaints with the police and the Dufferin-Peel Catholic District School Board to investigate. The DPCDSB did investigate, and eventually suspended Shoufani, and forwarded her case to the Ontario College of Teachers.

That’s where the story stands now, at least so far as I know. Let me stop here and add some important clarifications and qualifications.

First, there is no doubt that the al-Quds Day rallies are a magnet for ignorance and bigotry against Israel and Jewish people. B’Nai Brith even made a video of protesters being interviewed to illustrate the point. But if you watch that video (and Shoufani’s speech), it hardly rises to the level of hate speech. It’s true, as B’Nai Brith insistently points out that many of the speakers do encourage violence against Israeli settlers and the occupation forces. But if you actually look at what they’re saying, they don’t seem to be calling for violence against Jewish people in general. In fact, if you look at the Shoufani video, there’s a contingent of Jews who oppose the occupation not three metres away from her. What the speakers are calling for – Shoufani included – is violence specifically against “aggressors and oppressors”.

It’s certainly true that some of their demands are ridiculous, notably the demand that everywhere from the River Jordan to the Mediterranean Sea (basically, all of Israel) should be declared Palestine, and that all current Israelis should swear fealty to the Palestinian flag. It’s also obvious that a lot of the supporters were pretty darn ignorant about anything that didn’t directly support their cause. And yes, some of the people Shoufani named were straight-up murderers (though I’m sure they would argue it wasn’t “murder” so much as a killing done as part of a war of resistance). But in almost all cases, the ire seemed to be directed specifically at the occupation forces and settlers, and only Israel in general as an afterthought justified by opposition to the occupation.

There is also a long-standing problem in Canada of official, governmental repression of criticism of Israel. That context also has to be considered when you’re forming your opinion about the police and school board investigations of Shoufani and the other speakers at the event.

And although everyone is tight-lipped about the investigation and Shoufani doesn’t appear to be speaking publicly, there is some evidence that Shoufani’s suspension was not due to what she said, but rather for not cooperating with the investigation.

But what piqued my interest was not the dreary, old, tired Israel–Palestine “debate”. It was the irony of a Catholic school board having “serious concerns” about the “professional conduct” of someone for making intolerant and bigoted statements*.

* (I’m not saying Shoufani’s statements were intolerant or bigoted. I don’t think they were. I don’t particularly agree with some of what she said, but none of it, not even the parts I disagree with, are what I’d consider intolerance or bigotry. Just lots of anger, but anger justified by outrage at what’s happening in Palestine, which is perfectly legitimate.)

Immediately I began to wonder if any Catholic school board had ever “investigated” a teacher for speaking at a rally against abortion. Or against same-sex marriage. I highly doubt it.

A lot of the freakout over Shoufani has less to do with what she said at the rally, and more to do with what people have been scraping off old Facebook posts she made. Apparently she made a post in Arabic praising the martyrdom of someone who murdered a 4 year-old girl when he was 16 (in the 1970s). A horrible crime, sure, but again it made my head spin that a Catholic school board was trying to take the moral high ground on the issue of child welfare. And in particular, the Dufferin-Peel Catholic District School Board in particular, because it was only six months ago that they were caught covering up knowledge of one of their priest’s paederastic rape of a nine year-old in 2002. They only fessed up once the Toronto Star started investigating.

So how many DPDCSB officials were suspended for covering up the James Roth allegations? You can probably guess. Zero. But a teacher who represents no threat to the kids supporting an unpopular resistance movement…?

The great heroes at the DPDCSB have done a fine job of protecting their kids for alternative opinions. Pity they don’t do as good a job protecting them from rapists.