Daniel D’Aloisio has had his vanity plate for 15 years. It reads “VI6SIX”. But now, thanks to a complaint that it is religiously offensive, he may lose it. We’ve heard this story dozens of times before, but this time there’s an interesting twist. Daniel D’Aloisio lives in Toronto, and he’s not an atheist.

Toronto is more often associated with crack-smoking mayors and bad hockey than religious conservativism. But it only takes one complaint. The wording in the Toronto Star article (warning: auto-playing video at that URL) is a little vague, but it sounds like multiple levels of reviewers looked at “VI6SIX” and found it to be offensive enough to demand a recall. 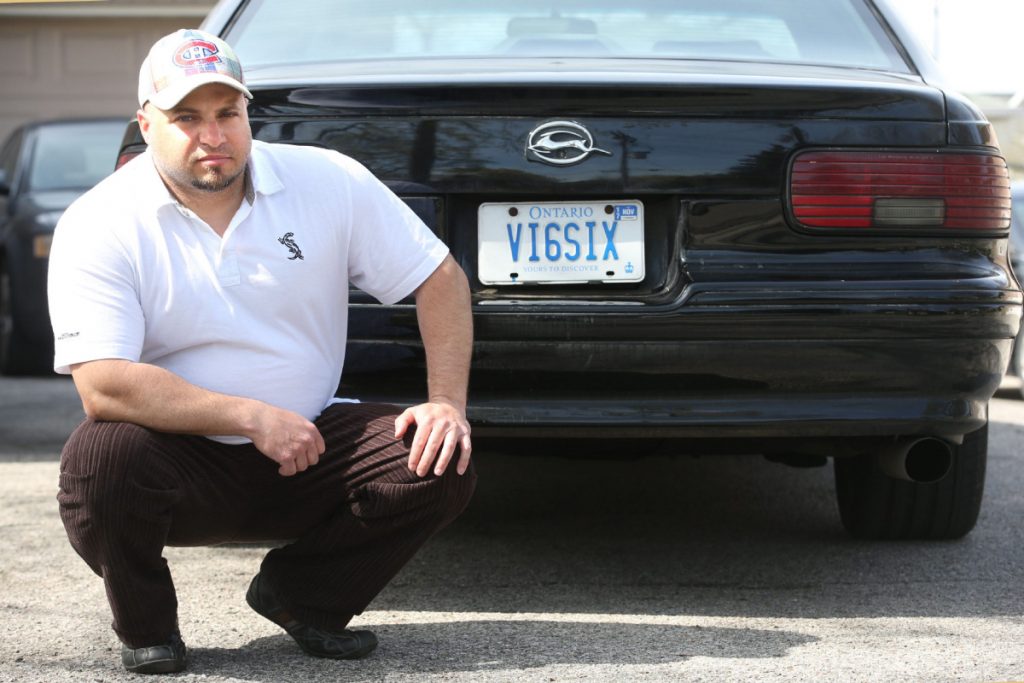 Quick quiz: Can you see what’s offensive about “VI6SIX”?

I honestly couldn’t. I had to read the article to figure it out.

You can probably guess why some Christian would freak out. And yes, it’s almost certainly a Christian who complained.

Interestingly, D’Aloisio is not a Satanist. Nor is he just a non-believer having a lark. In fact, he’s a practising Roman Catholic: I go to church, I was married in a church, my son was baptized in a church. Every day I wear a crucifix on my neck that was my dad’s before he died.

It turns out that the meaning of the licence plate is entirely unrelated to “666” at all. The “VI” is meant to be vie… French for “life”. He chopped of the ‘e’ for reasons of numerology: without the ‘e’, “VI6SIX” is six characters, which symbolizes the six people in his family (at the time he ordered the plate). (And, in my opinion, is a cool idea because it adds a fourth “six” to the mix.)

It turns out D’Aloisio is a huge hockey fan… not for the Leafs, but for a real team: the Canadiens. And his father had been a huge fan with him. Both were enamoured of legendary Penguins centre Mario Lemieux… famously number “66”. In 1993, still at the peak of his game, Lemieux announced he had been diagnosed with cancer… and in-between rounds of radiation therapy – which at one point was so bad he had to miss a whole season (1994–1995) – he broke at least a half-dozen scoring records, even winning the Hart Trophy in 1996 after having taken the entire previous season off. He scored 600 goals in 719 games, second only to Wayne Gretzky managing it in 718… and Gretzky didn’t take whole seasons off for radiation treatments.

One of the reasons D’Aloisio and his father were so inspired by Lemieux was because, like Lemieux, D’Aloisio’s father was diagnosed with cancer. Unfortunately, unlike Lemieux, cancer took the elder D’Aloisio.

Thus, the plate: “VI” (vie) for life, 6 for the 6 Stanley Cups D’Aloisio and his father saw won together (presumably 1976–1979, 1986, and 1993), “6SIX” for Mario Lemiuex’s number, and 6 characters in total for the six members of the family. You can hear D’Aloisio himself explain the symbolism in the video at the Toronto Star article.

Now I don’t think anyone that reads Canadian Atheist would think the plate “VI6SIX” is offensive… but then again I don’t think most readers would think a plate that read “666 FUCK JESUS” would be offensive either, were it possible. But the bottom line is that licence plates are the property of the province, not the individual, so the content of what is permissible on plates is limited by what the province is allowed to say… not individuals.

The mainstream news media is making a lot of noise about the fact that D’Aloisio has had the licence plate for 15 years, but I call bullshit. If it really is offensive and inappropriate, it does not magically become okay just because it took a while for someone to notice it.

The issue is not how long D’Aloisio has had the plate. Nor is it the meaning he gives to the plate. The issue is whether it is appropriate for the province to be issuing plates with that message.

Are your answers to the two questions above the same? They should be. If not, you’re being contradictory.

Are your answers to the questions above “yes”? That would mean you think the province has a right to proselytize.

It seems to me the only reasonable conclusion is that, while I cringe to admit it, the complainant is correct, and Mr D’Aloisio will have to give up his plates.

On the other hand….

There is a huge gulf between “666” and “VI6SIX”. I’m a Canadian Atheist writer, who is tuned to spot religiously “hot” symbolism, and I didn’t get it until I read the Toronto Star article. It takes a pretty big leap of interpretation to get from “VI6SIX” to “666”, and that leap is not by any means more “valid” an interpretation than D’Aloisio’s secular interpretation is.

So here are some other questions to ponder:

These are not trivial questions; they require some thought. So what do you think?