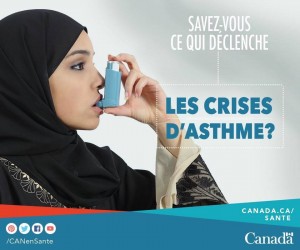 (Here is the kind of advertising that the Ministry of Health Canada produces. . . .)

Montreal, 18th March 2016 — Atheist Freethinkers (LPA-AFT), an association which promotes secularism and supports the rights of atheists, denounces the recent publicity of the federal ministry Health Canada which displayed the image of a woman wearing a hijab while using an asthma inhaler. The image appeared on the Facebook pages of Health Canada (https://www.facebook.com/HealthyCdns/ in English and https://www.facebook.com/CANenSante/ in French) starting on Feb. 21, 2016.

We agree with Waleed Al-Husseini, atheist, ex-Muslim and writer who, on his Facebook page, declares his outrage that the Canadian government could act with such serious complacency and with such contempt for women from an Arab background who are fighting against the imposition of the Islamist veil. The ministry’s action plays right into the hands of Islamists. The hijab is a banner of religious sexism which forces women to hide because they are diminished to the role of temptress. The hijab does not represent all Muslims!

Indeed, the hijab is an emblem of Islamist fundamentalism worn by women who are themselves fundamentalists or who are forced by fundamentalists to wear it. The niqab is even worse. It is unacceptable that the government should endorse fundamentalist religious proselytism in such a manner. If the hijab were a Christian accessory, we doubt very much that it would have been chosen for this advertisement. Furthermore, it would be unthinkable for Health Canada to choose for that image an individual wearing a crucifix similar in size to the hijab—that is, a third of a metre in height!

This image of a hijab wearing woman has apparently disappeared recently from the Facebook pages of Health Canada. Nevertheless, the spokesperson for Health Canada, in an attempt to justify use of the image, declared that the ministry would not tolerate “racist” or “hateful” comments. However, the adherents of a religion do not in any way constitute a race. Furthermore, there is nothing hateful about insisting that publications of the Canadian government refrain from trivializing the symbols of a dangerous ideology such as religious fundamentalism.

The woman in the Health Canada ad is very attractive; however, neither the hijab nor the inhaler is a fashion accessory.

2 thoughts on “Health Canada and the Hijab”