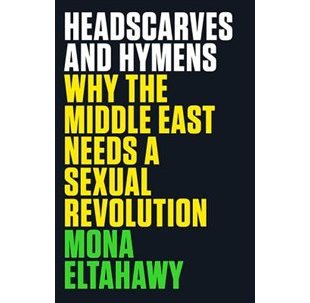 Mona Eltahawy’s book, Headscarves and Hymens: Why the Middle East Needs a Sexual Revolution, is a page turner.

Mona Eltahawy is an Egyptian woman who wrote an article for Foreign Policy entitled “Why Do They Hate Us?”; “they” being Muslim men, “us” being women. The piece sparked controversy, of course, making it clear that misogyny in the Arab world is something that engages and enrages the public.

In her review for Humanist Perspectives, Sheila Ayala says,

“All apologists for Islam should read [Headscarves and Hymens].

Everyone should read this book, especially those who maintain that women have the right to wear what they want to wear.

As Ayala points out,

Eltahawy has disdain for people who claim that wearing a niquab is a feminist issue and is a women’s right. Women covering their faces, even if they do so freely, doesn’t stop what this represents — that women should be kept hidden.

Read Headscarves and Hymens, even the title is provocative, and get back to me. Sheila Ayala and I would love to hear what you think.

9 thoughts on “Headscarves and Hymens”