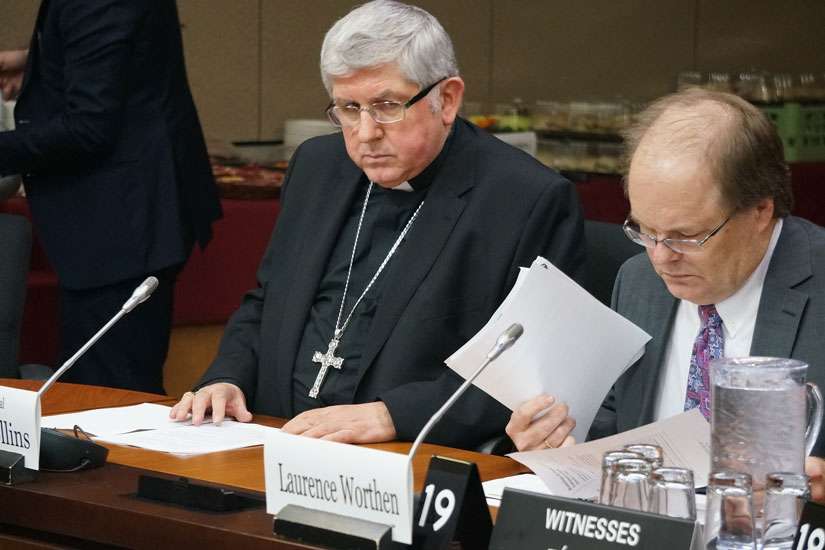 The grumpy looking old man wearing the symbol of persecution around his neck is Thomas Cardinal Collins, the archbishop of the Catholic Archdiocese of Toronto and the primary authority over publicly-funded Catholic separate schools in Ontario. As a Cardinal, Collins is a member of the hierarchy of the Roman Catholic Church, an institution that is responsible for the sexual abuse and intentional mistreatment of minors and the institution that recently advised

Newly appointed bishops . . . that it’s “not necessarily” their duty to report suspects of clerical child abuse to authorities.

The Catholic Church considers itself above the law and in a position to advise lawmakers. However, the Church may be justified in its opinion because lawmakers continue to invite members of the Church’s hierarchy to pass their opinion and affect the course of the law. A odious example of this is Collins appearance before the joint Parliamentary Committee on Physician-Assisted Dying:

The upcoming federal law regarding physician-assisted death must respect the conscience rights of doctors and other health-care workers, Cardinal Thomas Collins told a Parliamentary committee.

The parliament of Canada has allowed a member of a religious organization with no concept of moral or ethical behaviour to advise on matters of conscience:

“Our worth as a society will be measured by the support we give to the vulnerable. People facing illness may choose to end their lives for reasons of isolation, discouragement, loneliness or poverty, even though they may have years yet to live.

“What does it say about us as a society when the ill and vulnerable in our midst feel like burdens? Often, a plea for suicide is a cry for help. Society should respond with care and compassionate support for these vulnerable people, not with death.”

Collins doesn’t believe that physician-assisted dying “is the direction the country should be going” and believes “the rights of conscience need to be protected.” This is unmitigated religious  propaganda and most Canadians don’t agree with Collins or with those, like the Christian Medical, and Dental Society of Canada (CMDS) executive director Laurence Worthen, who support him. The word Christian in the society’s name is a smoke screen: it sounds good; it means nothing.

religion undoubtedly has a devastating effect on the everyday lives of untold millions across the globe.

All perfectly true Lee – nothing I disagree with, but I fail to see what is being said here that is new. Although another voice is always useful of course.

Yes, another voice advocating revoking religion’s free pass is always useful, and while the opinions in this post are similar to those expressed in previous Canadian Atheist posts, they bear repeating: religion has no business in the governments of the nation.