An article on CanLII Connects.org says

On April 4, 2014, the Ontario Divisional Court ruled in Erazo et al. v. Dufferin-Peel Catholic District School Board that, pursuant to the Education Act, certain students of Catholic public schools are entitled to an exemption, upon request, from some religious activities, such as mass and religious retreats.
Given that the operative provision had not previously been judicially considered, this decision will be of interest to all Catholic school boards in the province.

The “certain students of Catholic public schools” are students in publicly-funded Catholic secondary schools, but most, if not all, Catholic school boards in the province are ignoring the Ontario Divisional Court decision.

Despite the efforts of Secular Ontario, Humanist Perspectives, Civil Rights in Public Education (CRIPE) and the myexemption website, many parents and high school students are unaware of the decision, or the publicly-funded Catholic high schools are working hard to circumvent the decision in order to deny parents and students their rights under section 42 (13) of the Ontario Education Act. In fact, the administration in Catholic high schools becomes nervous and defensive when concerned citizens hand out the coupon below: 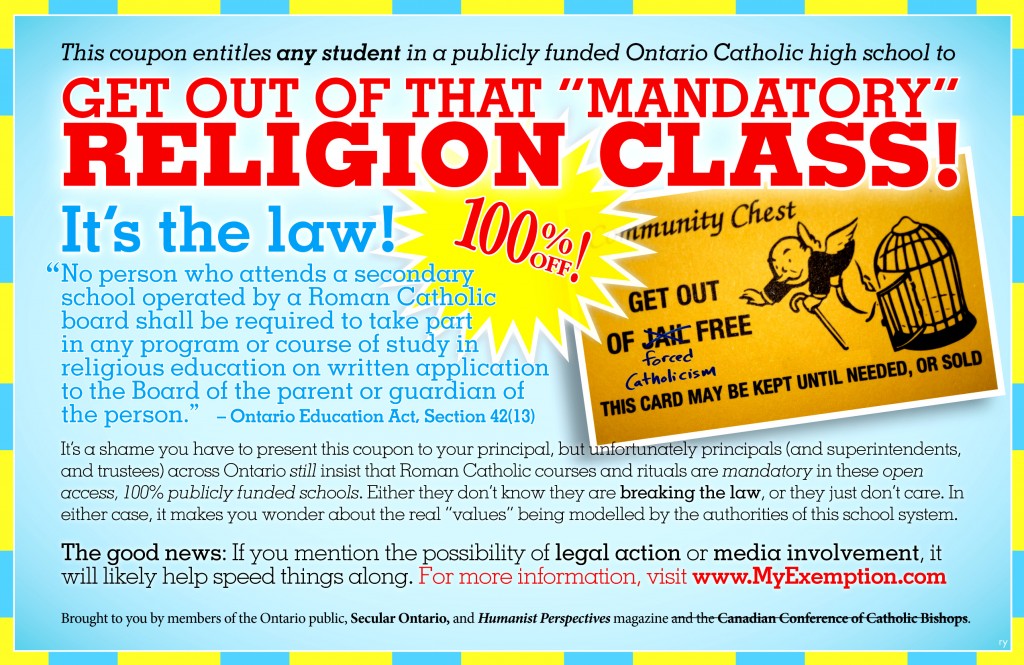 According to Global News, Hydro One and Catholic school funding are the most popular online Ontario budget ideas. Today, a search for “Catholic schools” on the Ontario Budget Ideas site brings up seven pages of ideas for “One School system”:

However, according to Finance Minister Charles Sousa, “that debate has been had.” Really, when did the debate take place and who participated? Did that debate include testimony from parents whose high school age children are forced to take religion classes despite the parents’ requests for an exemption?

It’s time for Ontario to listen to taxpayers. Parents and taxpayers who want Ontario to create one secular school system for each official language should take the advice of a member of CRIPE:

At the moment the opposition to privatizing part of Hydro One and ending public funding for Catholic schools are the most popular proposals. However, we know that Catholic school supporters will start to send in their objections to abolishing public funding. Essential that we counter that by making as many submissions as possible by the end of the month.
If you decide to make a comment stress that the status quo of funding 4 school systems is no longer sustainable. Its time to “excommunicate” public Catholic Schools. By abolishing funding to Catholic schools will save approximately $1 billion dollars annually from the Education Budget. Advocate for a single publicly funded school system consisting of English and French language school boards. Urge the government to live up to its commitments to inclusiveness and tolerance for all. One public school system will achieve these noble objectives.

It’s time for Ontario to listen to taxpayers and stop privileging one religion over all others.

One thought on “Catholic Schools: Debate? What Debate?”