It’s taken as a matter of course that Canadians are apathetic about the role of religion in society. But what if that’s not as true as commonly thought?

The Angus Reid Institute (ARI) is perhaps the most important independent polling organization in Canada. I’ve covered several of their surveys on Canadian Atheist. For their 2015 year-end wrap-up, they listed their top 10 stories, ranked by reader interest. It should come as no surprise that the 2015 federal election was #1, but some of the other topics making the top 10 are very interesting:

Two of the top stories of 2015 are explicitly about religion, and the general one about religion and faith in Canada was #3… above stories about ISIS, health care, and a couple to do with politics.

Even more interesting is what the folks at ARI found after digging a little deeper. The above ranking is based simply on which stories attracted the most attention. Interesting, sure, but, yanno, not that interesting. However, ARI also did a survey about engagement – about which stories people talked about the most in 2015.

It turns out that the most-talked about story of the year was not the election, it was the Paris terror attacks – specifically, apparently, the November attacks. The election was #2 (and #3, and #4; fair enough, it was a major Canadian story). Other stories that were widely discussed but didn’t make the top 10 above include the (presumably Residential School system) Truth and Reconciliation Commission, Senate reform, Omar Khadr, and vaccinations.

Surprisingly, prayer at public meetings was one of the stories this year that had the highest level of engagement – higher even than Senate reform, Omar Khadr, and the TRC. 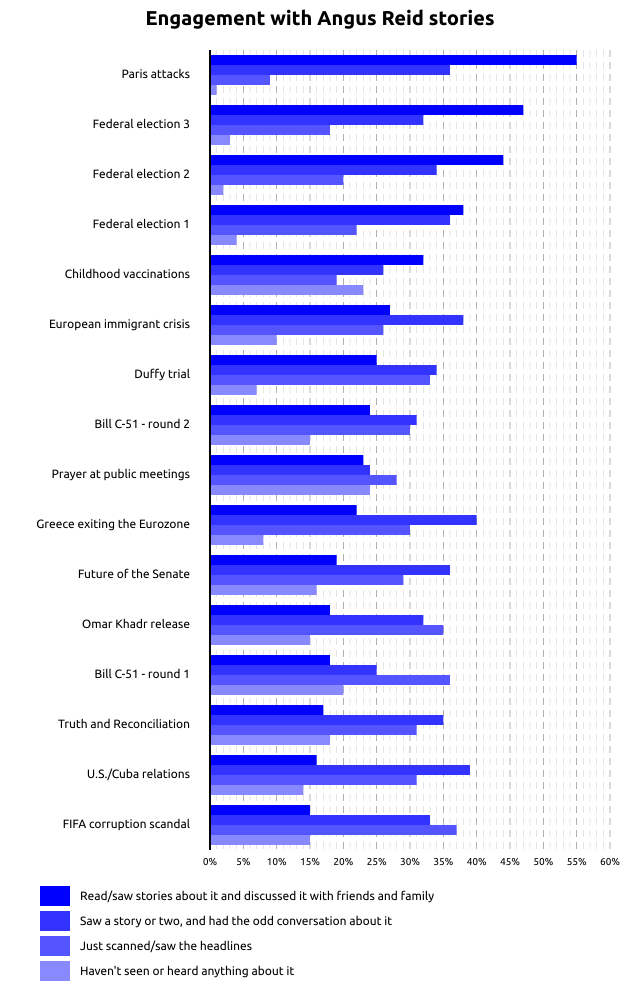 However, engagement was extremely polarized: either people talked a lot about prayer at public meetings, or they didn’t talk about it at all. Nothing else was quite so polarized in its engagement (though childhood vaccination comes close).

So maybe Canadians aren’t quite so apathetic about the role of religion in society as we’re commonly led to believe. It seems to be a topic we’re quite interested in, though in a very peculiar way. Quite a few of us refuse to talk about it all, but many do, and those who do, talk about it a lot. We have high engagement, but all clustered in a small group of people.

What this seems to suggest is that those of us who do talk about the issues should try talking about them with people we don’t normally discuss them with. That seems like a good resolution for the new year, I think.

So how about it, readers? How about making it a pledge for 2016 to try to talk about religion in society issues in places where we normally wouldn’t discuss them.