2015 was a shitty year. There’s really no way to put it more gently.

Book-ended by two of the worst acts of religious terrorism in recent history – both of which occurred in Paris, France – 2015 was a year of disasters large and small. Other than the attacks in France, perhaps the greatest tragedy was the series of murders in Bangladesh. Even here in Canada we weren’t entirely spared from religiously-motivated violence, though to our shame the attacks in Canada were targeting Muslims (and other religious groups apparently mistaken for Muslim). That was hardly something unique to Canada tough; 2015 also saw three model citizens in the US murdered by an atheist, ostensibly over a parking space, but likely because they were Muslim.

What a fucking mess.

And of course, I’m barely scratching the surface. Here in Canada, in January a child died needlessly because of alt-med stupidity, with the parents responsible shielded by religion and the troubling ruling of a misguided judge that would seem to imply First Nations fishing rights take priority over their right to life. And let’s not forget the plight of Raif Badawi, who should be in Québec with his wife and kids right now, enjoying new year’s wine and tourtière. I’m sure I’m forgetting some major stories, but I really can’t bring myself to trudge through the relentlessly shitty archives again.

I would have liked to give you some facts and figures about Canadian Atheist and its bloggers, like I did last year. Unfortunately, I can’t. We were hacked. Yes, again. Luckily it wasn’t as bad as in early 2014; we didn’t lose everything. But we did lose quite a bit, including pictures from older posts, and – in particular – all of our stats-tracking stuff. Hopefully (presumably), that data is still being stored somewhere – possibly on WordPress.org’s servers – but I don’t know how to find it, so I can’t actually say which posts were the most popular this year. I think my post on Canadian media’s response to the Charlie Hebdo massacre was my most popular post. Other candidates would be “Yet another survey shows majority support for defunding Ontario’s Catholic school system, but does it matter?” and “Diversity in Canadian atheist conferences”. If I had to guess at the top post overall this year, I would guess Diana MacPherson’s “Am I Still a Liberal If I Oppose Bad Ideas Some Minorities Hold?”.

If you’ve managed to make it this far, I hope I haven’t depressed you too much. See, shitty a year though it may have been, I am a creature of hope. Hope is the fuel I run on, and I assure you, my drive hasn’t slowed down in the least.

And there are reasons to believe that, shitty a year as 2015 was, things might just be on the path to get better in 2016.

A change at the top

The first ray of hope is on the electoral front. The big news is obviously the end of the Conservative dark ages. This was a government that should never have been, a government that bullied its way to a majority via successive elections run practically every other year for a decade – originally taking advantage of a protest vote against Liberal corruption with the Sponsorship Scandal – then turned their majority into a dictatorship. They used their power to drastically change the character of Canada itself and many of its institutions, aggressively pushing an image based on military history and colonialism (cf, their hard-on for the war of 1812 and the Franklin Expedition, and things like switching the Canadian Armed Forces Air Command and Maritime Command branches back to their old names “Royal Canadian Air Force” and “Royal Canadian Navy”). They muzzled scientists, harassed charities, ruined evidence collection for governance, and racked up one of the worst records in the first world on human rights and the environment.

Well, this November, Canadians told them to get the fuck out of Sussex Drive, almost giving the Liberals more additional seats than the Conservatives had in total (Liberal gains in 2015 were +148 seats… Conservative holdings before the election were 159). This despite the gerrymandering the Conservatives tried pulling – they added 30 seats to be won and then went and lost 60.

And while there are some people concerned about Trudeau, so far he seems to be making the right moves, and saying the right things.

The federal election is only the most obvious face of this surge back to progressive leadership. Newfoundland and Labrador Liberals also scored a historic victory a few weeks later, and one can hardly fail to mention what happened in Alberta – in both cases breaking almost century-long streaks of conservative governments. In general, there is good reason to believe that the next few years will be a revival of progressive values and leadership in Canada.

Secularism is now defined in law

The second major ray of hope this year was the Supreme Court’s historic ruling against prayer in government meetings. Mouvement laïque québécois v Saguenay (City) is already being cited as precedent in other cases. Personally, I did not find the ruling itself surprising (while many Canadians assume the SCC is as backward, right-wing, and conservative as the US Supreme Court, the reality is that our Supreme Court has always generally been a strong ally of secularism and progressivism in general), but I was quite pleased to see that not only was the ruling completely unanimous (the only objections were to points of legal minutia unrelated to secularism), but also how bold and clear newcomer Clément Gascon was in the official opinion. (I think also that MLQ v Saguenay may have been the very first majority opinion Gascon wrote for the SCC! Someone buy this guy a beer!)

It’s hard to say exactly how far-reaching MLQ v Saguenay‘s effects will be. Predictably several Christian government leaders have put on public performances of persecution, and have sworn to defy the ruling, but Canadians by and large are not on their side. I’d say we haven’t even begun to see the real fallout from this ruling.

Our leaders are being held accountable

While it has yet to go viral in Canada itself, there is a seismic shift happening at the grassroots level. We’re all quite familiar, and frustrated, with politicians responding to reoccurring tragedies with platitudes about offering prayers, rather than taking the concrete steps that they should be taking to prevent them from happening yet again. Up until this year, that was just something we could do nothing about except grumble.

And then, on 3 December, after yet another mass shooting in the US, the New York Daily News published this cover: 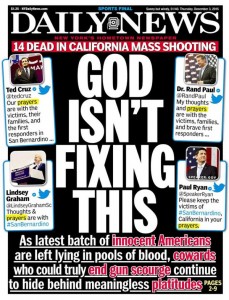 That is a jaw-droppingly provocative cover, even in 2015 (which, honestly, is sad). And predictably, US right-wing media lost their shit over it.

But the message was sent, and the impact has been incredible. It’s still too fresh to say if there will be any lasting effect, but it is entirely possible that – from this point on – the “thoughts and prayers” platitude will be immediately recognized and called out, by mainstream media, by everyone, rendering it largely ineffective as a dodge for responsibility. Hiding behind piety just got a lot harder.

… and even the darkest of stories, still shines light

Makayla Sault tragically died, and her parents and the “health gurus” responsible likely won’t be charged for manslaughter. However, the other First Nations child stricken with cancer – the one we can identify only as “J.J.”, whose case actually went to court (and ended up with a misguided judge making a terrible error he later tried to correct) – is still alive, and that’s because they restarted her chemotherapy. Her chances now are measurably lower than they would have been had they not ditched the chemo in the first place, but still extremely good. More importantly, the original terrible decision (which effectively said that so long as you could frame it in terms of aboriginal tradition you could basically shrug off all of the protections of the Charter of Rights and Freedoms) was “clarified” (in reality, completely overturned, and replaced with a sane, sensible ruling).

But in perhaps my favourite turn of events this year: Especially after the second historically-terrible religiously-motivated terrorist attack in Paris this year, there was much concern about how French president François Hollande would react. Would he follow the pattern set by US leadership, of hardening attitudes toward everyone in the Middle East, even refugees fleeing war and famine?

No. Instead, just days after the initial attacks – the same day the ringleader was being taken down – France’s atheist president responded by announcing that France would accept more refugees, specifically thumbing his nose at those who would use the threat of terrorism to justify bigotry and intolerance: Life should resume fully. What would France be without its museums, without its terraces, its concerts, its sports competitions? France should remain as it is. Our duty is to carry on with our lives. Fuck yeah.

Lastly the final bit of good news worth mentioning (though this bit was initially cut out when I copied the wrong version to the blog): the birth of Secular Lynx. It started out using WordPress, but can now be found on can now be found on Storify and Google+ (which is where I follow it). I’ve already started to rely on it for Canadian secular news.

So 2015 was a shitty year. In its final hours, there’s a lot to reflect over. When I raise my glass just before the final countdown, I’ll be raising it to heroic cartoonists at Charlie Hebdo, to the 130 victims of the November Paris attacks, to the millions of refugees of the conflicts in Syria and the surrounding areas, to Avijit Roy, Oyasiqur Rhaman, Ananta Bijoy Das, Niloy Neel, and Faisal Arefin Dipan, and to many more.

But life marches on, and in a few short hours it will be a brand new year; a chance to do it better. Hope is the fuel that drives me, and at least today, with a whole new year laid out before me, I see plenty of roads still to be travelled.

See you on the flip side.