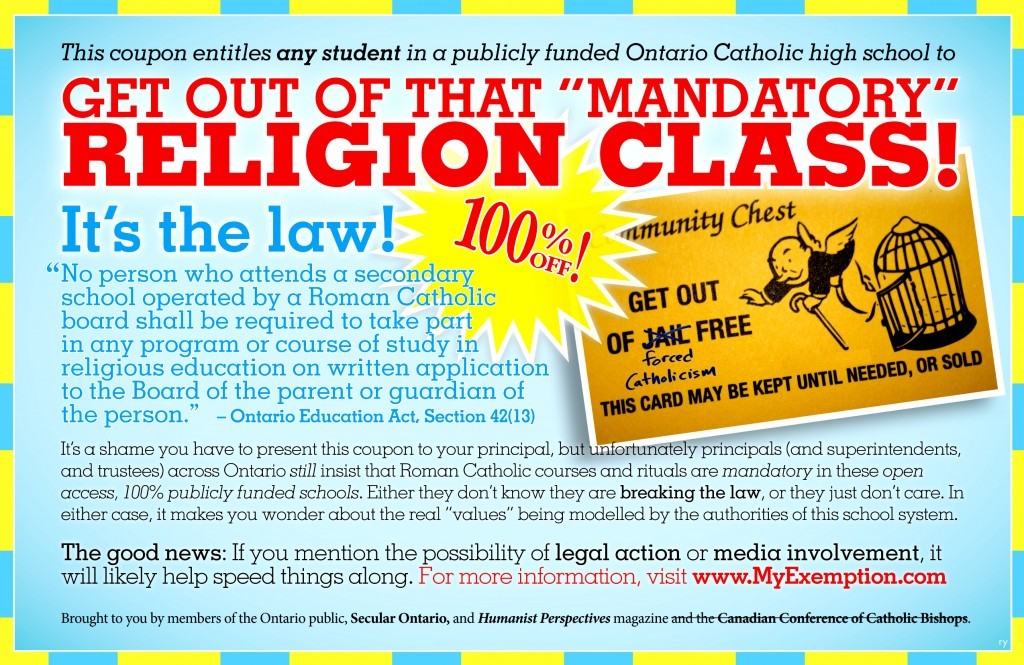 In an article from September 5, 2014, Grant LaFleche argues that Ontario publicly-funded Catholic schools are on a slow march to extinction. He compares Catholic school boards in Ontario to Wile E. Coyote:

no matter how many times he falls off that cliff or runs headlong into a stone wall, he still gets up and tries to eat that bird.

He cites the case of Peterborough Catholic school teacher Paul Blake, who was

disciplined by the Catholic high school he taught at because he told his students about a Ontario Superior Court ruling stating Catholic schools — as publicly funded institutions — cannot force students to take religious studies.

The name of the school is St. Peter Catholic Secondary School, and it’s a dinosaur that shows no evidence of becoming extinct. Although LaFleche says Catholic boards “reacted [to the Ontario Superior Court ruling] by jumping into bed, pulling their blankets over their heads and pretended the court ruling doesn’t exist.” St. Peter Catholic Secondary School doesn’t even hide it’s determination to discourage students from learning about their right to get an exemption from religion courses.

After Paul Blake was disciplined, and I was energetically discouraged from handing out  “Get Out of That ‘Mandatory’ Religion Class” coupons to students after classes at St. Peter, it is difficult if not impossible to get anything other than anecdotal evidence that St. Peter is denying exemptions to students who request them.

The good news is students who attend Ontario Catholic schools read Canadian Atheist, and they use the Canadian Atheist “Contact” form to ask questions and get assistance. Yesterday, an email from “Anonymous” arrived asking if the people or the group responsible for handing out the “Get Out of That ‘Mandatory’ Religion Class” coupons would hand them out at his or her school.

Of course I replied,

Yes, Anonymous, there really are people and groups interested in getting the coupons to as many students and schools as possible, and they will work hard to find people to hand out the coupons at your school.

However, the people and groups interested in getting the coupons to as many students and schools as possible need your help. Use the contact form

Together we can make Grant LaFleche’s prediction come true one dinosaur at a time.