Marco DeRossi, member of the Board of Directors for Atheist Freethinkers/Libres penseurs athées, exercised his right to vote in the 2015 federal election wearing the costume featured in the photo below: 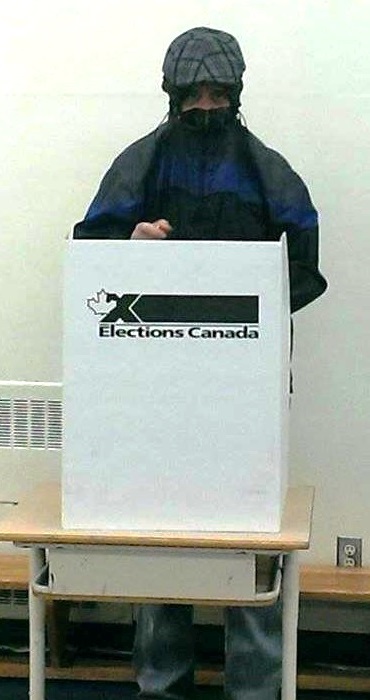 DeRossi shares his experience in an article entitled “Canadian Masquerade“:

Just to set things up for you, Zunera Ishaq is the fundamentalist Muslim woman who, after a two-year legal battle, obtained permission from the Federal Appeal Court to take the citizenship oath while wearing her niqab.

Ms. Ishaq maintains that her battle to wear the niqab while taking the oath is merely a personal choice. However, according to Ms. Tahir Gora of the Canadian Coalition of Progressive Muslim Organizations, Ms. Ishaq is motivated by political considerations. In fact, Zunera Ishaq works as a volunteer for an organization linked to Jamaat-e-Islami, whose military wing is considered to be a terrorist organization. Up until last October 16th, her Facebook profile mentioned that she is a member of Jamaat-e-Islami and a supporter of this Pakistani political party.

Thus, she became a central figure in the 2015 federal election campaign.

In the wake of this court ruling, the Harper government announced that it would appeal to the Supreme Court. However, the other political parties took advantage of this controversy by alleging that it was only a diversion to distract us from real matters of importance. My response to all these antics is that the niqab issue is indeed one of real importance. Furthermore, it raises the question of the radical segregation between women and men, which is incompatible with fundamental democratic principles.

It was in this context that a wave of protest arose. Building on this electoral issue, Caroline Leclerc, a communications and marketing coordinator, used her Facebook page to encourage voters to cast their vote while wearing a face-covering. She succeeded in attracting more than 9000 people who indicated their intention of wearing a mask when going to vote. With a certain degree of sarcasm, Ms. Leclerc declared that:

“It is not those voting with a potato bag or other disguise on their heads who are ridiculous. What is ridiculous is that our laws allow this to occur, and we will denounce that situation.”

I endorsed this cause and went to vote wearing a mask, feeling a little ridiculous and uncomfortably hot; I was nevertheless reassured by the fact that several others had done the same. At the polling station, no-one asked me to remove my mask. I was asked for my driver’s license (with photo?!?) in order to verify the address inscribed on my voter card. I was not asked many questions, nor was there any attempt to verify that I really was the man shown on the driver’s license because no-one saw my face. I asked the people staffing the table if I needed to expose my face, and they replied that that was unnecessary because “we recognize you by your eyes.”

As a result of these events, the consequences of the Federal Appeal Court decision are unacceptable because it is now permissible to present oneself anywhere with the face covered, with no obligation to prove one’s identity. The repercussions of this situation go far beyond a simple masked ball. It will now be possible to defy the Montreal municipal by-law P-6 whose purpose is precisely to prevent street demonstrations with face-coverings.

If there is no longer any requirement to show one’s face for identification purposes, may we from now on have driver’s license (or passport) photos taken while wearing a mask? Such are the consequences of multiculturalism of the Trudeau (father and son!) variety. Now that we are saddled with a government which allows absurdities under the guise of freedom of religion, we are the laughing stock of the world.