Recently there was a lot of disgust expressed against a “Man charged after ‘fornicating the statue,’ police say”

In all the above cases the charge was ‘mischief’.

In the CBC video, the CBC commenter (About 1:30 in if you watch) refers to the monument and says “And Canadians gained a new sense that this is a hallowed place.”

Definitions for ‘hallowed’ include ‘sacred’, ‘holy’ and ‘consecrated’. Is this monument now a religious object? How so? and must we as a secular society respect the supposed ‘hallowness’ of an inanimate object?

A not dissimilar outrage was expressed against a teenager in Pennsylvania a few years back. Jerry Coyne discussed it on his website. 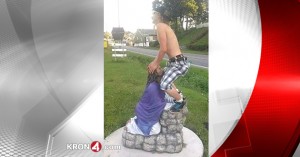 Obviously a statue on church grounds is a ‘hallowed object’.

And from the recent Huffington Post video on Ottawa by Chris Hau, I made this still. 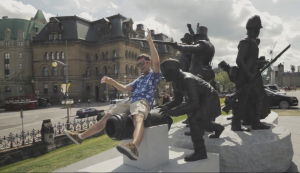 If we are to become a secular nation, will we have honoured monuments that we must respect? Who gets to decide which monuments are honoured? Would ‘giving the finger’ to the concept of war in the form of the war memorial count as disrespect? Instead of ‘fornicating’ could one simply give the finger to a Jesus statue? (Blasphemy!) Could one be arrested for giving the finger?  Do people have a right to not be offended after all? Where are the limits to free speech to be drawn then? Must we have limits? It’s certainly obvious to me that religious reasons are not sufficient.

5 thoughts on “The Limits Of Free Speech And Public Monuments”