While it may be a bit of an exaggeration to say, “Everybody is doing it,” many Canadian organizations are giving funds to help Syrian refugees:

“We believe that Canada should open the doors and help out. We are a country of immigrants and we believe it is time to show we have a heart.”

Seneca College in Toronto has chosen to “Make a Difference” with a fund raising event to “raise awareness for Médecins Sans Frontières/Doctors Without Borders and support the relief effort for refugees in Syria.” 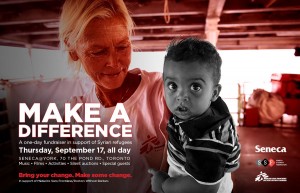 Today the BC Humanist Association announced its Humanist Action Campaign:

a new campaign to put compassionate Humanist values into practice through charitable giving. We will feature causes and fundraising events – suggested and led by members – that we can come together to support. . . .
Our first initiative is a fundraising challenge in support of Syrian refugees. Based on its exemplary track record in providing the most value per donation, we have chosen to raise money for Médecins Sans Frontières’ (Doctors Without Borders) work in Syria.

Please consider donating to the BCHA Fundraiser to support Doctors Without Borders’ work in Syria.