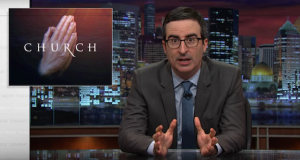 lavish lifestyles of televangelists and Oliver did so wonderfully by showing clips of the likes of  Robert Tilton, Creflo Dollar (the guy who started a fund for a 65 million dollar plane), Mike Murdock (who bought several lavish planes) and Kenneth Copeland (who asked his followers to help him buy a 20 million dollar jet) all unabashedly asking their flock to donate to their luxurious airplane causes.

But Oliver revealed something I didn’t expect: the truly despicable and slightly psychopathic Prosperity Principle. In short, wealth is seen as a sign of God’s favour and those who donate money will see wealth come back to them. Televangelists exploit the Prosperity Principle in the form of “Seed Faith” (donations = seeds you get to harvest). Oliver shows examples of televangelists predatorily imploring people with credit card debt (people who clearly don’t have the extra funds) to hand over any money ear marked for debt repayment because God will take this seed money and wipe out their debt! Not the best investment strategy and Oliver amusingly points out that participating in this type of “investment” is tantamount to suggesting that:

The key to you losing weight lies in the bottom of this giant COSTCO bulk bag of peanut butter M&Ms! Go find it; it’s definitely down there!

While you may think that a fool and his money are easily parted, these televangelists are preying on vulnerable people: the poor and the sick, including Bonnie Parker, who chose to “sew” money into Kenneth Copeland’s ministry instead of treating her cancer. She died believing that the greater amount of money she “sewed”, the greater chance she had of a miraculous recovery. It really saddens me when people choose malarky over proven medical treatment, eschewing the rewards of living in a scientifically advanced civilization for dark age charlatanism. Gloria Copeland’s words are an affront to modern society:

We know what’s wrong with you; you’ve got cancer. The bad news is, we don’t know what to do about it except give you some poison that will make you sicker. Now, which do you want to do? Do you want to do that or do you want to sit here on Saturday morning, hear the word of God and let faith come into your heart and be healed? Hallelujah.

Wow. That’s a lot of psychopathy to take in all at once! It’s one thing to really believe in woo and to think you are doing legitimate good even though you are doing terrible bad. But, this woman is preaching these lies to line her coffers; she doesn’t really care one way or another if the inflicted watching the show find a cure to their illness or not, as long as they send in their “seed money”.

Oliver goes on to expose the tax free status of church donations and ultimately and hilariously creates his own church. Watch the whole clip – it’s very entertaining despite the maddening details Oliver brings to light. The only disappointing part is when Oliver introduces the segment, he carefully points out that his attack on churches will not include those that help the poor and perform other charitable acts. I take his point that there are churches who do genuinely good deeds, but they still enjoy the same tax-free, audit-lite status the televangelists enjoy, all the while shoving their beliefs onto vulnerable people, while non-religious charitable organizations, void of any preachy impetus fill-in reams of paperwork each year to maintain their non-profit status.