It’s almost the end of the “lazy, hazy, crazy days of summer,” but the 2015 Canadian election pollsters are just gearing up to predict how Canadians will vote on October 19, 2015. For many of us, it’s too much and too early with no relief in sight. However, the video “Harperman, a Protest Song” and the story that accompanies it may make you wonder how Stephen Harper’s Conservatives are maintaining even second place in the polls:

“Harperman,” written and performed by Ottawa folksinger Tony Turner, is effective, so effective that Turner

A scientist with Environment Canada has been put on administrative leave with pay pending an investigation for creating a politically charged protest song about ousting Conservative Leader Stephen Harper.

The Harperman Song Project has a

crowdfunding campaign to support a “Harperman Cross-Canada Sing-Along” on Parliament Hill and 14 other locations across Canada on Thursday, September 17th. We are asking people to go to the Indiegogo page to make a donation and help spread the word.

and is working on making t-shirts available. 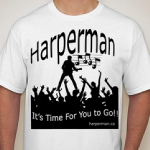