I’ve been asked why CFI Ottawa would want to walk at Pride? After all I was told, “GLBT aren’t being oppressed here in Canada as they once were”. “Why do GLBT want to have a party about being queer?” “I’m straight so it would not be right for me to march with you.” I had to explain over and over again that from our perspective it is not a celebration of a queer culture nor is it a party. We are supporting GLBT against the irrationality of beliefs based upon scripture. Our own signs carry the message “Stop faith based bigotry” 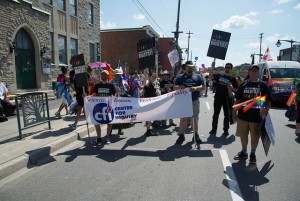 Every year we have hateful preachers who stand in front of churches or at street corners telling the marchers that they are going to hell. Every year we have our very own Jesus in the form of Brad Murphy to make a mockery of these people. 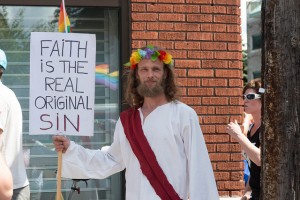 Our “Jesus” has quite a fan following at our pride marches. 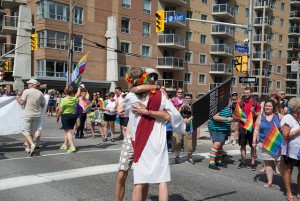 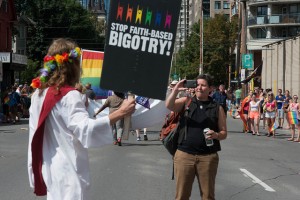 Our Jesus “saves” the hateful preachers from their “sin” 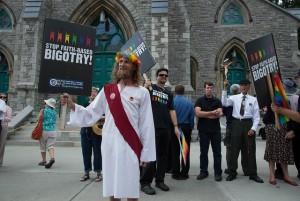 This guy is a regular and stands on a street corner carefully keeping his face hidden behind the cross. 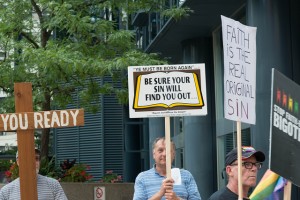 This guy uses a microphone and loud speaker each year to harass the marchers and we helped silence the hate from this guy at least for a few minutes. 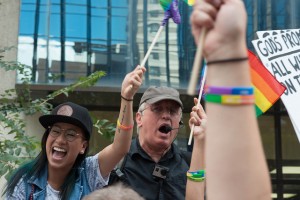 This was my first year leading CFI Ottawa into the pride march but the first year where I realised that many people still don’t understand just how important it is for us to show that hate from the religious is something that cannot be tolerated. We must make bigotry from the religious made to look as ridiculous as possible