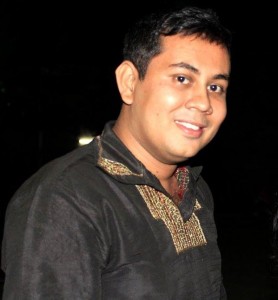 Today, the International Humanist and Ethical Union (IHEU) along with numerous other atheist, humanist, or secular organizations has released a statement on the death of Niloy Neel, the fourth atheist activist murdered in a year in Bangladesh:

Niloy Chowdhury Neel, an online activist and secularist protester, has been found dead in his home, according to early reports. He was decapitated and his hands had been cut off. The four or five assailants had apparently gained access to his building by posing as a tenant, shortly after Juma prayers this afternoon.

In response to yet another religiously-motivated murder, IHEU President Andrew Copson said,

“This latest murder demonstrates once again that the culture of impunity for these Islamist vigilantes in Bangladesh has become firmly entrenched. Humanists internationally are calling on global civil society and democratic governments to stand with the bloggers of Bangladesh whose rights to freedom of religion or belief, to freedom of expression, and to life are being routinely negated. Freedom of speech and the rule of law are being undermined and the Government of Bangladesh needs to act to restore them or continue to lose some of its bravest, most thoughtful, and inspiring citizens, to its continuing shame.”

Hemant Mehta at Friendly Atheist continues to update his post, “A Fourth Atheist Blogger Has Been Hacked to Death in Bangladesh,” with links to statements and demands from various US organizations:

The American Humanist Association demands an end to the slaughter.

The Center For Inquiry reiterated its support for that resolution.

In Canada, Sean McGuire, at My Secret Atheist Blog, calls on the

Office of Religious Freedom and Department of Foreign Affairs to not only strongly condemn this barbarism but also offer amnesty for all of these bloggers. Then, we all need to work with organizations interested in human rights to get these people out of Bangladesh.

CFI Canada calls on Canadian, Bangladeshi and International government leaders to take concrete action to protect secular and atheist bloggers and free speech, to prevent and curtail fanatical religious violence in Bangladesh and in their own countries.

Mukto-Mona, “an Internet congregation of freethinkers, rationalists, skeptics, atheists & humanists of mainly Bengali and South Asian descent who are scattered across the globe,” issued its “Statement on the Murder of “Niloy Neel’”

Ansar Al Islam, the Bangladesh branch of Al Qaeda in the Indian Subcontinent (AQIS) has claimed responsibility for murdering Niloy Neel in his own home, in front of his family, because of his writing. The fundamentalists continue in their tradition of responding to the pen with machetes; the government of Bangladesh continues to supply the fundamentalists with all that is necessary to keep their machetes honed.

which included this personal message,

The Mukto-Mona family will always remain by the side of Niloy Neel’s family. The pain of losing a child or a husband in this untimely and brutal manner is not to be forgotten. But know that there are thousands of us beside you—and we will be there forever. To send any information about Niloy Neel, and for Niloy’s family to contact Mukto-Mona for any support, please write to: contact@mukto-mona.com

The vicious murder of Niloy Neel, the latest in a series of murders and attacks by fundamentalists, adds to Bangladesh’s shame. However, Canadians too should be ashamed because in Canada,

there is a law against “Blasphemous Libel.” Strong constitutional protections probably make the prison sentence truly unenforceable, but the law remains on statue.

Canadians need to voice their objection to Canada’s blasphemous libel law by asking the federal candidates in their riding this question: Do you support repealing Section 296 of the Criminal Code which makes “blasphemy” a crime?