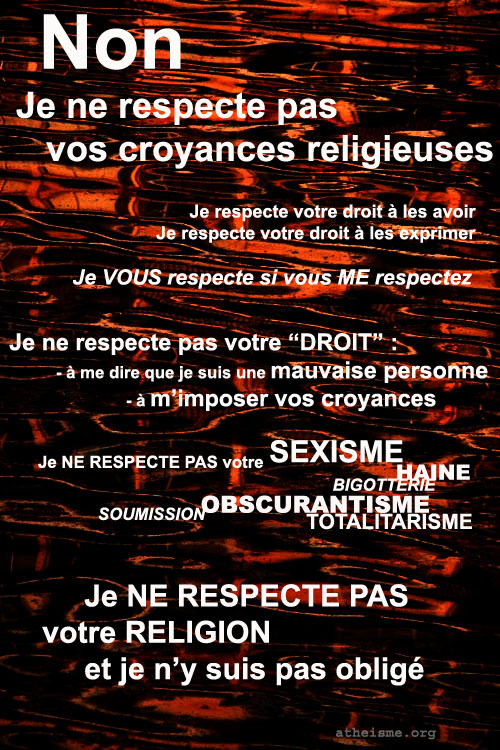 There is no such thing as a religious “obligation” because religious belief is not an innate characteristic.

and addresses religious accommodation, dispels the myth that religion is innate and characterizes the wearing of religious symbols as “Bad Fashion Choices”:

the Islamist veil is a symbol of misogyny and fascism. The Christian crucifix is also a symbol of fascism; after all, the Roman Catholic Church has generally been a faithful ally of fascist regimes in Europe and Latin America. That is why the crucifix must be removed from the wall of the National Assembly in Quebec City.

Thus I repeat: We must not fall into the trap of accepting the myth that wearing a crucifix, veil or turban, etc., is somehow “obligatory” because it is supposedly the reflection of some innate characteristic of the bearer. On the contrary, it deserves no more deference than any other fashion choice. It can be removed.

The second article, “Polite Self-Censorship No Environment for Free Speech” addresses the “implication . . . that we must all endeavor to be polite about religion.”

Multiculturalism’s proponents have garnered popular support for the illiberal notion that all citizens in liberal democracies must demonstrate respect for religion or religious believers. Yet this respect is not to be earned by valid arguments or by exemplary behavior; it is to be coerced by violence, or else by means of the law. Those who would limit speech on the grounds of ‘religious offense’ are content to allow the public marketplace of ideas to be governed by the taboos of a religious segment of society.

and “gives several reasons to reject this form of cultural imperialism,” reasons that complement the thesis of “The Myth of Religious Obligations”:

Religious minority groups are by no means homogeneous in religious belief, practice or sentiment.

Westerners need to ask which Muslims they intend to protect by means of new censorship laws or informal policies of self-censorship.

Political liberalism, secularism, atheism and feminism are as much a part of many peoples’ identities as religion is a part of the identity of the committed Muslim.

Imagine a context in which the same right not to be offended or defamed could be claimed by other political ideologies, other social groups and other communities. Public debate would quickly be replaced by courteous silence.

During the roundtable discussion of “Is Christianity in Decline?,” Majed El Shafie declared to great applause,

politically correctness is the cancer in our Canadian fabric. (16:00)

If Shafie is correct, “Polite Self-Censorship No Environment for Free Speech” shows the cancer has spread.