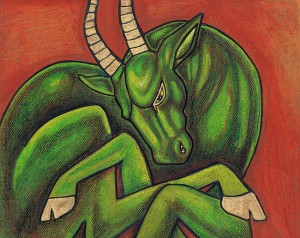 Recently on this site, there has been a discussion about whether an atheist should say gods do not exist or that atheism is a lack of belief in gods. The underlying concern is can you prove a negative, which brings up the question is anything possible? In my response to the question I described a creature, the Planet Eating Vorpal Dragon Kitten. Is it possible this creature exists?

What if someone were to write a computer program comprised of 5,000 adjectives and adverbs that randomly described one of 5,000 random nouns. An example could be Green Gigantic Cosmic Goat. Can we prove this creature does not exist? No, but what is the probability that any of the millions of creatures created by the program exist? Is it realistic to be agnostic to the creatures created by the program or just call them nonsense? Nonsense is the correct answer.

Why are gods not considered nonsense? The Planet Eating Vorpal Dragon Kitten has a greater probability of existing than a god because it could have evolved naturally in strange circumstances somewhere in the universe whereas gods are poofed (imagined) into existence. When a telescope takes a photo of a Planet Eating Vorpal Dragon Kitten having lunch, I will then consider it a real possibility and when a god shows up I will then consider gods a real possibility. Until then, neither exists.

17 thoughts on “Is Anything Possible?”